I was happy to learn that Danny DeVito, an actor whose performances have given me a great deal of pleasure and laughter, was given his own star on the Hollywood Walk of Fame yesterday. His was the 2,445th star to be installed. 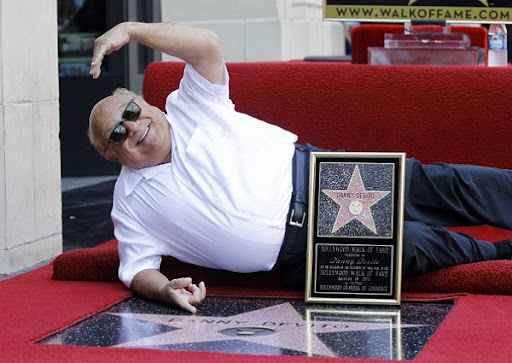 I'm not much of a moviegoer, but over the years I've enjoyed Mr. DeVito's acting in films such as Romancing the Stone, The Jewel of the Nile, Twins, Batman Returns, Renaissance Man, Get Shorty and L.A. Confidential. The first three of those films were released during some very dark moments in my life. Mr. DeVito's comedy performances helped me to laugh my way out of some very depressed times (including the death of my fiancée), and keep me sane. I'm very pleased that his contribution to cinema has been recognized in this way.

Good for him! He's a consummate professional, from what I've read.

What took them so long?

Danny's a funny guy alright. I laughed my way through many "Taxi" episodes thanks to danny.

From what I read he's an avid Obama/Democrat supporter and a Tea Party foe.

I generally don't pay attention to such things, but I guess I assumed he had already been so honored. Years ago...
Q