Miss D. and I had a busy (read: exhausting!) day, with a great deal of fun and enjoyment. We started with breakfast at our hotel's restaurant with Old NFO this morning. Large quantities of eggs, toast, bacon (BACON!!!), sausage, orange juice, coffee and laughter followed before we headed out to the gun show.

We spent a couple of hours of walking the serried ranks of tables, ogling much assorted ironmongery in one form or another. One dealer had a few Colt revolvers in the magnificent Royal Blue finish, which Miss D. had never seen before. Old NFO and I pointed out to her how it's such an incredibly rich, fluid gloss that one could probably shave in it if necessary. I didn't need (and couldn't afford) any of the Royal Blue guns on display, but I couldn't help drooling a little over them. (For the benefit of readers who've never seen it before, here's a picture of a Colt 1911 pistol and a Colt Python revolver in Royal Blue finish. However, the picture can't do justice to the reality. One has to see this finish 'in the flesh' - or should that be 'in the steel'? - in order to properly appreciate it.) 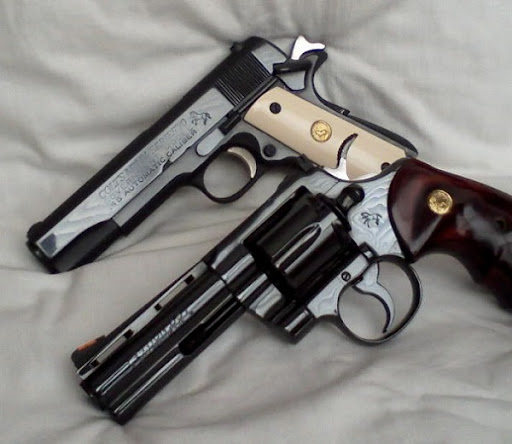 (Image courtesy of user 'jwise' in this post at the Officer.com forums)

Many dealers offered knives and related accessories and services. Miss D. got her old pocket-knife sharpened to a wickedly dangerous edge, and we found a couple of Schrade lockback knives for very reasonable prices, so we now have matching 'his-and-hers' blades - just what every good couple should have! (To the purists among us: no, they aren't 'original' US-made Schrades, which are usually priced somewhere up there in the stratosphere! These are made in China under the Schrade brand name. Even so, their quality isn't bad for a working pocket-knife. They're certainly serviceable enough to use with confidence.)

Overall, prices at the Indy 1500 gun show were much better than those I've encountered at gun shows elsewhere. They weren't cheap, mind you, but they weren't up there at nosebleed altitudes either. I daresay the current state of the economy has dealers in a more realistic frame of mind. I hope the trend continues. For myself, I prefer private purchases and sales of firearms, and have done for some years now. It simplifies matters considerably, and allows for negotiation, swapping items in trade, and that sort of thing - all of which helps both parties to get value for their money and/or goods.

After the gun show we returned to our hotel for a quick meal before heading for the blogmeet. Lunch was interesting. I found a cheese-and-fruit plate on the menu, and Old NFO and myself decided to share one, while Miss D. had a salad. It turned out to be a very large and well-filled plate indeed - the more so after our waitress obligingly made a couple of raids on the kitchen to fetch more crackers and cheese. The three of us ended up sharing Heaven knows how many calories of the stuff! Cheddar, Pepper Jack, Camembert, provolone, smoked gouda and a couple of cheeses I couldn't identify were consumed in large quantities by all concerned. Very yummy!

The blogmeet this afternoon was a lot of fun. Something like twenty bloggers and relatives showed up, making for a crowded, noisy and highly entertaining afternoon. Brigid's already put up some pictures of the fun and games. Turns out today was the sixth birthday/anniversary of Tamara's blog, so congratulations and a few celebratory brewski's were in order.

Miss D. and I arrived back at our hotel exhausted, but happy. We fell into bed to sleep off some of the exertions of the day, and I'm typing this late in the evening after resurfacing. I'll put up a couple of posts, then it's back to the land of nod for yours truly. Normal blogging will resume tomorrow evening after our return home.

Had me a Coly Python with a 4-inch barrel and custom grips when I was in law enforcement. It was a fantastic weapon. Accurate and powerful. Of course these days 6-rounds, even with speedloaders don't cut it with 13+round semi-autos.

I used it as my on-duty weapon back in the 1960's. Not too many Glocks back then.

I staggered the 6-rounds. 3-armor piercing with 3-hollow point. I figured if i was going to come up against a car the armor piercing .357 round would work. Against a human the hollow point would take the perp out. Of course, I always had to remember to "double-tap".

Yes... it can be wonderful to have a blog-family. Enjoy!

Great to meet you finally, and in person. Glad you could make it!