A fascinating look at a human warren


The history of Hong Kong's infamous Kowloon Walled City has long interested me.  It was a 'no-mans-land' during the British colonial era, due to an accident of nineteenth-century politics that effectively rendered it a separate enclave, under neither Chinese nor British administration.  Inevitably, criminals and others exploited that status to make it their base of operations, where police from both sides feared to enter.

The Walled City grew up haphazardly, shacks being piled upon shacks, no architect or city planner ever bringing order to its ramshackle chaos.  As a result, access to upper levels was often by ladders and ropes.  Stairs, where they existed, were usually precariously secured to external walls of the rickety buildings.  Dwellings were small and cramped, no more than one or two small rooms, into which entire families crammed themselves.  (At its greatest, the population density of the Kowloon Walled City was estimated to be almost five million people per square mile!  By comparison, New York City's population density is reported to be 26,403 per square mile.)  Criminal Triads and gangs took over parts of the Walled City as their 'turf', and waged fierce battles to keep out others of their kind.

A very interesting article in the South China Morning Post gives details of this strange place, which flourished and grew like a weed until it was finally demolished some 20 years ago.  It includes a fascinating and very detailed hand-drawn graphic, depicting life in one small part of the Walled City.  Here's a blown-up segment of a very small part of the graphic. 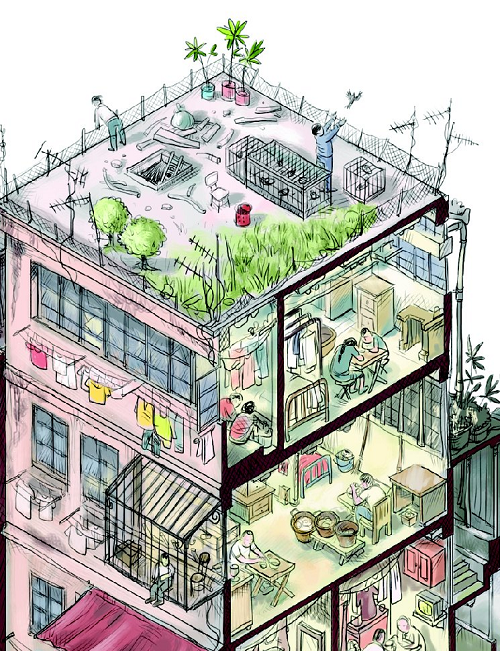 There's much more in the full graphic, which may be viewed either as part of the article, or at the StudioX blog.  It's well worth looking at it closely.  Someone took an awful lot of time, and went to a lot of trouble, to depict all that so realistically.

The Kowloon Walled City was demolished in 1993/94.  The site where it once stood is today a park.

I remember when we were through there in 74-75, we were told NEVER to go near the place...

You should have taken a little walk through it, maybe with a tour guide.

It was a fascinating place. Too bad it's gone.

What a "unique" place. The drawing in Studio X is fabulous.

I've been fascinated by Kowloon for years, myself. Partially because I have this thing for cyberpunk/post apocalypse stuff, but also because HOLY CRAP PEOPLE WERE LIVING THEIR LIVES JUST FINE WITHOUT GOVERNMENT HOLDING THEIR HANDS! UNPOSSIBLE!

Granted, Kowloon could hardly have been called utopian, but it seemed to work in its own strange way. The anarchist in me kinda digs it.