Terrorism, the Constitution and civil rights


The terrorist bombing in Boston has raised all sorts of issues about the conduct of police and city administrators in dealing with the threat.  Two sides of the problem have been illustrated (literally) by other bloggers.  From The Broken Patriot, we have this: 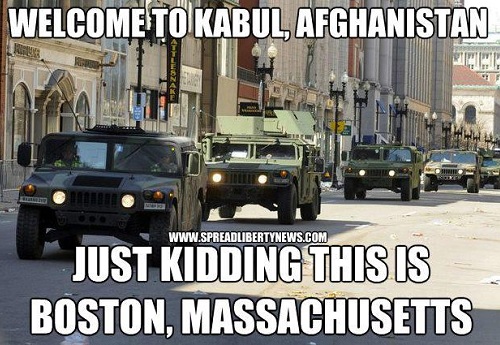 As a counterpoint, from Lagniappe's Lair we have this: 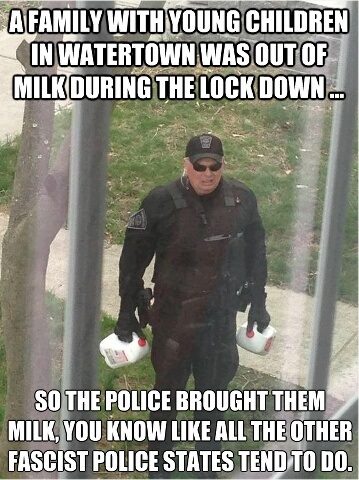 It's a monumental conundrum.  Our Constitution is very plain and clear as to the right of citizens to be secure in their lodgings and possessions, which are not subject to arbitrary and capricious search and/or seizure.  There's no doubt whatsoever that the authorities rode roughshod over those rights in Boston during the lockdown.  However, they argued that the exigencies of the situation warranted their actions;  that the urgent need to locate the bombers, prevent further bombings, and possibly rescue anyone being held hostage by them, overrode individuals' constitutional rights.

I'm not convinced by the latter arguments.  There are those who see it that way (for example, The Warrior Class advises profanely that 'Some folks need to get a grip'), but I'm not among them.  At the same time, I agree that the authorities had to take extraordinary measures to ensure public safety in the light of the ongoing threat.  I can't agree with those who believe that nothing can possibly justify infringing the rights and liberties of citizens.  That way lies potential catastrophe.  I've encountered terrorism the hard way (I've written about it before), and I know from bitter personal experience that theoretical constitutional perfection simply isn't practical under some circumstances.  If constitutional purists wish to argue the point, that's their right . . . but they're living in cloud cuckoo land.  (This is not to say that blatantly unconstitutional laws such as the Patriot Act are acceptable - they're not, and never will be - but to acknowledge that in specific instances, in the heat of the moment and under imminent threat, sometimes practicality supersedes principle.  In a perfect world, it wouldn't be like that . . . but we don't live in a perfect world.)

So what can be done to ensure public safety, whilst simultaneously infringing as little as possible upon the rights of citizens and residents?  Here are a few suggestions.


The problem is, the authorities don't wish to have such a discussion.  It's much easier and more convenient for them to simply issue orders, dictate what we should do, and have us obey blindly and willingly.  Worse still, many of their people will eagerly enforce such measures - witness the hundreds, if not thousands, of law enforcement and military personnel who descended on the streets of Boston during the recent crisis.  How many of them went there with an attitude of being public servants, rather than public masters?  You tell me . . . but from the evidence of photographs and news reports, I'd say relatively few of them had the right attitude.  (Admittedly, the conditions under which they operate day by day have a great deal to do with that - but even so . . . )  The same attitudes and concerns were evident during and after Hurricane Katrina in 2005.  I wrote about them at the time.

I will not surrender my constitutional rights just because someone in authority says I must.  No right-thinking American should.  At the same time, I have to acknowledge that those in authority have a very difficult job to do.  Sometimes, in the heat of the moment, they're likely to err on the side of Big Brother rather than the side of legal, constitutional perfection.  We need to debate the issue now, and make our concerns known to those in authority, so that as far as possible, we can avoid an over-emphasis on either side of the equation in future.

Ah, Boston. Remember the Aqua Teen Hunger Force guerilla marketing campaign? Boston was the only city that went into a hyperventilating, mindless panic over a panel of Lite-Brites.

Our Founders wouldn't know whether to puke or start throwing bitch-slaps, if they could see the hive of authoritarian cowards Boston's become.

- shows families being forcibly removed, at gunpoint, with hands held up, by the LEOs.

You are ether free or you are not. When the Jackbooted, black uniformed Nazi scum order me to stay in my home and wait for a door to door search, is the day I take up arms to kill as many of them as GOD will let me. I hope that many more feel that way. I know I will die, and can only hope and pray that the jackbooted scum and all who support them burn in hell.

I'd like to see them try that in Dallas, or Fort Worth... Just sayin...

NFO, we are just as urban as they are. Police will be able to do the same thing with little resistance. Outnumbered and outgunned homeowner is going to cooperate.

The above link is why we will have a lawyer involved and not firearms. Proper tool for the job.

Jesse west of Houston where we personally know our officers. Keeps that sort of thing in check.

When I was in school we were told that military offensives could not be undertaken on American soil due to posse commitatus. We were also taught that martial law could not be declared on American soil. Both of those things are now out the window. The Constitution is regarded as a quaint historical document. Very dangerous times.

Not only was it a grossly illegal breach of the constitution: it was the wrong thing to do on many levels. Now the next set of terrorist wannabes or criminally insane who wants to go out with a bang know their efforts can lock down an entire city. In other words: the Boston response has added additional incentive for would be terrorists. More will come.

I saw SWAT tems searching houses and I was gobsmacked. While I understand the need to search for the bomber, I don't think you need 10 fully armed SWAT guys in my house. This is also why people do not want gun registration. Thay confiscated guns after Katrina. What if the FBI had a list of gun owners and they decided they needed to "secure" those guns to prevnet them from falling into the hands of the bombers???

I wonder if anyone with the Boston PD and surrounding areas has considered asking the, oh, say Tel Aviv police how they would deal with a similar situation?

And what about turning the neighborhood into a free fire zone? Some of those rounds entered private homes. With all the high tech armored vehicles and body armor, did they really need to fire over 200 rounds? Why isn't this being talked about?