Today's winner comes from China - and I have to admit, this is one of the weirdest Doofus posts I've ever put up!  The Austrian Times reports: 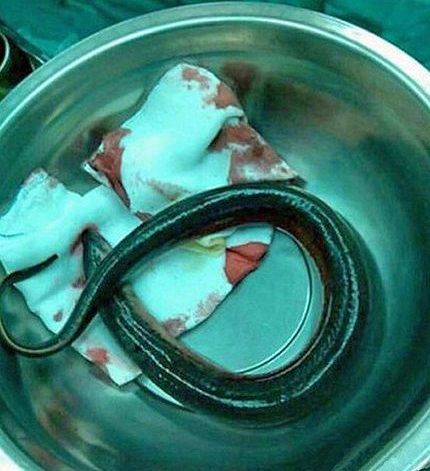 Surgeons finally removed the 20 inch long Asian swamp eel - which weighed more than half a kilo [over a pound] - in the early hours of the morning after a lengthy treatment with drugs and medical probes.

"This was a particularly idiotic stunt and could have caused him a serious injury. Eels have small but very sharp teeth," they added.


There's more at the link, including an X-ray image of the eel inside the man's body.

There's so much one could say about this!

I'm sure he's eel-ated they fixed the problem

I think you got the italics in the wrong place-to me this makes more sense...No, that's not right either....this puts the emphasis where it belongs:
In fact, he had more than his head up his ass!

I said, 'Fix the damn thing and leave my private life out of it, okay pal.' "

I feel terribly sorry. For the eel. What did it ever do to deserve that?

This is not the first time this has happened:

A 50-year-old Hong Kong man in this earlier case. Generalizing from these two cases about Cantonese-speakers would be wrong. (Internecine Chinese dialect joke from a Mandarin speaker.)

> Fix the damn thing and leave my private life out of it, okay pal."
The stuff I've heard from colleagues in the ER .... You usually get some unbelievable story along the lines of "I was just getting out of the shower and slipped." Few years ago a young man came in belly-down on a stretcher, with a long curtain rod sticking out of the, um, vent. His first words were, "I have no excuse, please just fix it." That actually won him some respect in the ER. One gets so tired of the bullshit.

To be fair, it seems like "NYPD" should be considered a plausible excuse.

I bet that he was feeling quite eel.

Man, that mention of sharp teeth made everything just....pucker up. Hoooboy!