What's the US money supply up to?


The Federal Reserve has more than tripled the US monetary base since 2008, leading to widespread fears (shared by this writer) that severe inflation (possibly even hyperinflation) is a distinct possibility.  However, in John Mauldin's latest 'Outside The Box' newsletter (link is to an Adobe Acrobat document in .PDF format), he provides a different perspective from Hoisington Investment Management.  The latter company believes that the monetary base must be distinguished from the money supply.  Here's an excerpt from their report.

“The Federal Reserve is printing money”. No statement could be less truthful. The Federal Reserve (Fed) is not, and has not been, “printing money” as defined as an acceleration in M2 or money supply. Just check the facts. For the first quarter of 2013 the Fed purchased $277.5 billion in securities (net) as their security portfolio expanded from $2.660 trillion to $2.937 trillion. A review of post-war economic history would lead to a logical assumption that the money supply (M2) would respond upward to this massive infusion of reserves into the banking system. The reality is just the opposite. The last week of December, 2012 showed M2 at $10.505 trillion, but at the end of March, 2013 it totaled only $10.450 trillion which was an unexpected decline of $55 billion. Printing money? No.

This broad misconception of the Fed’s ability to print money has been widely embraced since the Fed began its massive balance sheet expansion near the end of 2008. It was then that the Fed expanded the monetary base from $840 billion to $1.7 trillion in a matter of months. Further, from the initiation of this misguided program to the end of March 2013, the Fed has expanded the monetary base from $840 billion to $2.93 trillion. The money supply indeed went up (35%) but not in proportion to the increase in the monetary base (249%). Presently, the year-over-year expansion of M2 is only 6.8%, which is nearly identical to its year-over-year growth rate in March of 2008 before the Fed decided to “help out the economy”. In other words, there is no evidence that the massive security purchases by the Fed have resulted in a sustained acceleration in monetary growth; nor is there evidence that economic conditions have improved.

Our present economic situation is nearly unparalleled in American history. An examination of the real economic growth rate of each decade in the United States from 1790 to 2012 [see chart below] reveals the unprecedented sluggishness of our present economic environment. The 1.8% average rise in the thirteen years of this century is less than half of the 3.8% growth rate since 1790. The only decade that witnessed worse economic conditions was, of course, the 1930s. 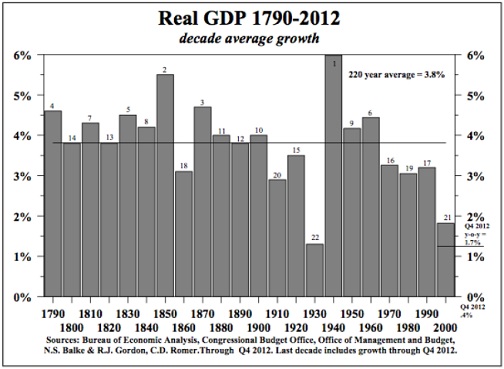 
There's more at the link.  The bold underlined text of the last sentence is my emphasis.  The whole article makes very interesting (albeit economically technical) reading, and is highly recommended.

Trouble is, there are two points that Hoisington and other commenters are not making:


I'm not convinced that a deflationary trend is imminent.  I tend to agree with analysts such as Prof. Laurence Kotlikoff and John Williams, whose grim warnings we discussed in February.  I see nothing in the Hoisington report to persuade me that their forecasts are in error - only additional material that might expose yet more problems to take into consideration.

We can argue about whether the forthcoming fiscal and economic calamity will involve inflation or deflation, currency collapse, or whatever;  but whatever it may involve, I have no doubt that it's coming.

Like you, I'm concerned that the Fed buying large portions of our debt is a problem. Writing ourselves a check to deposit in our checking account, and writing checks against that.

But if we're already buying 90% of it, and I've seen the number being talked about, how much worse does adding the last 10% make it? Can we survive without any other country using dollars? That's the way it's moving right now, with China making deals to do all trade in other currencies.

@Graybeard: The problem with the Fed buying 100% of US treasury debt is that it'll be printing even more dollars than it is already. That'll further debase our currency against others, and lead to its collapse on international exchange markets. That will end the dollar's reserve currency status, and make everything we buy from overseas - including energy - vastly more expensive, if not completely unaffordable. It'll make our exports more attractive, sure, but that'll be cold comfort when we can't get oil, cheap manufactured goods, etc. in return.