An article in Collectors Weekly prompted many memories of studies in past years.  The article is titled 'How Collecting Opium Antiques Turned Me Into an Opium Addict'.  Here's how it begins.

Recently, Steven Martin—no relation to the actor—came by the Collectors Weekly office and told me all about his harrowing journey from collecting to substance abuse. He started out collecting innocuous things; at first, it was seashells and stones, then it was currency and Asian antiques like textiles. Eventually the Navy veteran found his way to Bangkok, Thailand, where he worked as a journalist and travel writer, covering Southeast Asia.

There, he also discovered the beauty of antique opium pipes, bowls, and lamps, as well as opium trays and the hundreds of little implements that went with the ritual. 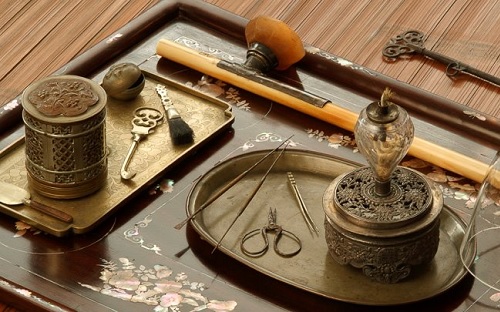 Because opium smoking had been so thoroughly eradicated around the globe in the early 20th century, Martin realized very little had been written about these objects. After years of intense research, he produced the first opium-smoking antiques guide, The Art of Opium Antiques, in 2007.

Martin’s research wasn’t limited to mining Victorian medical books or hunting down authentic pieces on eBay. As he came across various pipes and tools, he sought out the last of the Laotian opium dens to learn how these accoutrements were used and, yes, to try them himself. Before long, he and a friend had created their own private opium den in rural Southeast Asia, but when another of Martin’s smoking buddies, a top Asian ceramics expert, died in 2008, possibly from withdrawal symptoms, Martin knew he had to quit before it was too late for him, too. This summer, Random House published his latest book, Opium Fiend: A 21st Century Slave to a 19th Century Addiction, in which Martin details how his obsessive collectors’ bug led to his opium addiction.


There's much more at the link.  It's very interesting reading.  Recommended.

The memories this article brought back for me are of the years I spent studying colonial history.  Britain fought two Opium Wars with China, designed to force the latter nation to allow British merchants in India to export opium to China as trade goods.  They led to the first of the so-called 'unequal treaties', which ultimately fostered the rise of Chinese nationalism and led to the Communist takeover there after World War II.  Much of modern China's distrust of foreigners and insistence on its status as a superpower can be directly traced to lingering resentment and xenophobia caused by this period of colonial history.  Personally, I can't blame them.  In their shoes, I'd be equally resentful!  (It's also no surprise that many people in the Far East regard it as poetic justice that illicit narcotics from their part of the world - see, for example, the Golden Triangle - are now a major source of problems in Western nations.)

The enormous influx of opium into China during the mid-19th century led to massive addiction problems, which rapidly spread to Chinese expatriate communities overseas.  So-called 'opium dens' soon sprang up in most major European and US cities, and became a blight on civic consciences as details began to emerge of both Chinese and local addicts dying in squalor.  The development of opium pipes, lamps and other specialized paraphernalia is inextricably linked to these 'dens',

I hadn't realized how much of this paraphernalia had survived into modern times. There are many pictures of it in the Collectors Weekly article, and more at Steven Martin's Web site.  It's a fascinating insight into a profoundly shameful period of human history - one deliberately fostered and encouraged by many of our ancestors for commercial gain.

Labels: Boys and their toys, History, Interesting facts
Email ThisBlogThis!Share to TwitterShare to FacebookShare to Pinterest

Before wringing one's hands over the evils of the opium trade, one might want to consider what led to it in the first place.

At the time, China had a huge trade surplus that was sucking all the capital out of the rest of the world (sound familiar?) and they refused to import any legitimate goods from the Europeans. In order to prevent that economic distortion from destroying the economic order of the day, the Europeans had to find something that was both portable, in high demand inside China, and which was of high enough value to make a difference. That "something" was opium, and as much moral culpability there is for the Europeans doing that, the Chinese only had their own arrogance to blame for it. Absent the refusal to trade legitimately, there never would have been an Opium War, which was more about restoring the trade imbalance than it was about selling opium.

The conventional "wisdom" on these matters rarely tells the whole truth about them.

I read an old account of an Austrailian travelling through China.

He said a large percentage of the Chinese already used opium, and grew it themselves...

The ones objecting to the opium trade only did so becuase they grew and sold it, and didn't want the competition.

He claimed there was little negative effects to individual users.

Oh for God's sake. I know morons, Australian or not, who are similarly convinced that cocaine "has little negative effect to individual users" as well. Until they stroke out or have a major heart attack from it, but annoyingly fail to die, thus burdening the rest of us with the huge costs of their medical care for the rest of their miserable lives. (And "miserable" is not my comment on their moral worth, it's literally what their lives will be like if the stroke's bad enough or they end up a cardiac cripple.)

As to the first commenter, yeah right. "And I raped her in self defense." Yes, the Qing-dynasty Chinese had idiotic and arrogant trade policies. The government was horribly corrupt. In short they were largely assholes. But to cast the Honorable (ahem) East India Company and its ilk in the role of the poor wronged honest traders is either remarkably foolish or a piece of convoluted sophistry that comes from a place where the Enron guys were really good, decent folk with the best interests of the common man at heart and where Bernie Madoff was just hoping to inject a little hope into peoples' humdrum lives.