I'm sure many readers remember the 1967 move 'The Dirty Dozen'.  I didn't know that it was based on a real unit until I read the obituary of Jake McNiece in the Telegraph.  Here's an excerpt.

Jake McNiece, who has died aged 93, was the leader of the “Filthy Thirteen”, a crack US Army demolition unit that inspired Robert Aldrich’s macho classic The Dirty Dozen. 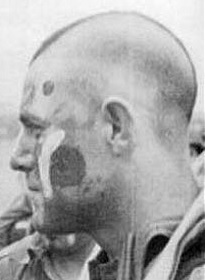 The “Thirteen” was an unofficial unit (in fact consisting of up to 18 men) within the 506th Parachute Infantry Regiment, 101st Airborne Division. It was parachuted into France hours before the D-Day landings to take and hold a bridge over the Douve river, in a bid to prevent German reinforcements from moving into Normandy.

The group derived its nickname from the fact that they showered just once a week and never washed their uniforms — as well as from their insubordinate attitude to authority. “We were absolutely undisciplined,” McNiece recalled. “We did not greet the officers and we did not speak to them by saying the traditional 'Sir’. We used to call them by their nicknames.” Following the example of McNiece, whose mother was a Choctaw Indian, the men prepared for their mission by shaving their heads into Mohican haircuts and smearing their faces with war paint.

Shortly after midnight on June 6 1944, McNiece and his men parachuted behind enemy lines. By the time dawn broke, they had destroyed two bridges and had taken up positions on the bridge over the Douve. They held it against German counter-attack for three days until the structure was bombed, apparently in error, by the US Air Force. “I was submerged by anger,” McNiece recalled. “We had kept this bridge despite all opposition! And it’s our aircraft which bombed it!”

McNiece and his men subsequently joined the main invasion, and on one occasion were on the winning side of a firefight that saw 700 German soldiers killed in just 20 minutes. Paratroopers did not take prisoners, as he later explained.

McNiece believed that the group had been selected because their task was regarded as a “suicide mission” and, as notorious troublemakers, the men were seen as expendable. “The average lifetime of a paratrooper was one and a half jumps,” he recalled. “They gave you one day’s food supply when you left the plane, and they figured you wouldn’t eat all of that.”

By the time McNiece returned to Britain after 36 days of fighting, all but three members of his unit had lost their lives. Yet there were some compensations: the survivors “got two months’ wages plus everything we stole in France”.

On September 17 1944 McNiece and his unit, their numbers swelled by replacements for those who had lost their lives in Normandy, parachuted into Holland, where they fought alongside other airborne troops for 78 days. Subsequently McNiece was locked up after taking an unauthorised five-day break in Paris.

To escape further retribution he volunteered for the Pathfinders, the elite paratrooper unit that provided logistical help to Allied missions — and suffered a casualty rate of 80 per cent. Parachuted into Bastogne, Belgium, during the Battle of the Bulge, he led a unit operating beacons which guided in 6,000 aircraft carrying vital supplies.

His last jump, on February 13 1945, was near Prume, Germany, to resupply General George Patton’s 3rd Army.

McNiece admitted later that his exploits on the battlefield had been somewhat overshadowed by his unruly reputation, as a result of which promotions to sergeant were quickly followed by demotions back to private. But in the eyes of his men McNiece could do nothing wrong. “We all did what Jake did because we had total faith in him,” Jack Agnew, a fellow survivor, recalled. “He was utterly fearless and working with him was an honour. He never asked his men to do anything he wouldn’t do himself.”

Sgt. McNiece was awarded four Bronze Stars, two Purple Hearts and the French Legion of Honor.  It sounds like he was quite a guy.  Still, for obvious reasons, I hesitate to say that this report 'passes the smell test'!

However, despite his very brave and illustrious battle feats, after reading about his attitude I doubt he'd be officer material.