Of mines and landslides


News of a landslide at the Bingham Canyon copper mine, one of the world's largest open-cast mines, comes as a blow to those of us affected by the current shortage of ammunition.  Since cartridge cases and many bullets use copper in their manufacture, this is going to put a further crimp in supplies. 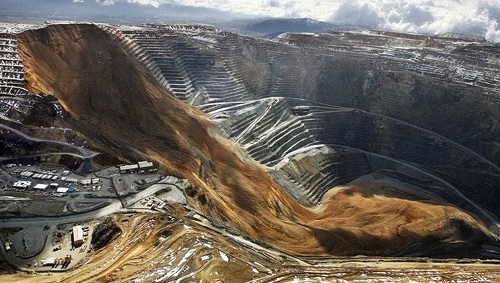 According to BoingBoing, the mine "supplies about 17 percent of U.S. copper consumption and 1 percent of the world’s. When a cog that big loses its teeth, the whole global economic machine goes clunk."

Be that as it may, the report reminded me of another, even more spectacular landslide at the Third Beach open-cast tin mine, near Pantai Remis in Malaysia, in 1993.  It was captured on video by a local resident.  The footage has been called the most spectacular ever filmed of such an incident, despite its relatively poor quality.  Watch as the seaward 'wall' of the open-cast mine gradually collapses, letting in the water (which eventually filled the entire mine, forming a new half-mile-wide and -deep bay in the coastline).  It's worth watching in full-screen mode, if you can stand the out-of-focus image.

Note how the dry land flows like water, even before the sea comes roaring in.  I wouldn't have liked to be standing anywhere near that lot . . .

Can you imagine what it sounded like though? Wow.

Yep, THAT left a serious mark...

I wonder if that's what it looked like when the mouth of the Black Sea broke and let in the ocean? Except on a vastly larger scale.

Glad no one was hurt.

The Wall St Journal is reporting that copper is currently a bit of a glut on the market. Ammo and component shortages result from panic buying.

I had the chance to visit that mine in 2010, and it's beyond spectacular in person.

Thankfully,no one was hurt because they had evacuated the mine. I've read there were reports of instability for a while.

Looking up some projected impacts of the copper shortage, though, some analysts are saying they thought there was too much copper on the market in the coming year and this would keep prices from collapsing quite as much.

This is a good news/bad news thing, like the price of oil being down. Yeah, it's nice gasoline is cheaper, but the price is lower because the speculators think the worldwide economy is going to tank. Same idea with "Dr. Copper".