As goes fuel usage, so goes the economy


Last week I mentioned that international oil shipments are in the doldrums, with tanker charter rates falling through the floor.  A report from Zero Hedge yesterday confirms that the decline in fuel usage is evident in the US as well.

Energy Information Administration ... data on barrels of US product supplied of both total petroleum products and just gasoline are as indicative of the true state of the energy-hungry beating heart of the US economy as any other data set, and is likely a far more accurate representation of what is really going on between the lines.

Sadly, if that is indeed the case, then the disconnect between propaganda myth and reality is about as big as can be, since on a blended 52-week average basis, the total product supplied of motor gasoline is back to 2003 levels (black line on chart below). However, where it gets really scary is looking at the total product supplied category, which includes gasoline and all other product such as heating oil, propane, and kerosene. As the chart below shows, the US economy, whose GDP we are led to believe has never been higher, now has the same total consumption of all petroleum products (red line) as it did... back in 1997! 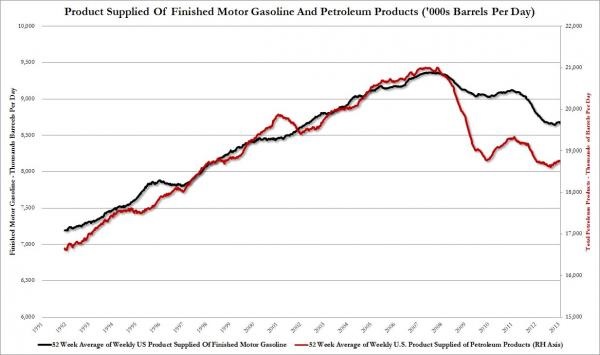 Perhaps ... the collapse in energy demand in the US has ... everything to do with the US consumer being slowly but surely tapped out?

Of course, if that is the case, than the US economy is far, far weaker than even we could have surmised, although it certainly would explain the desperation with which the Fed is doing everything in its power to preserve the levitation of the S&P, i.e., the confidence that all is well despite all signs to the contrary. Because should the market finally be allowed to reflect the underlying economy - not the administration represented economy, but the real one - then everything that has transpired in the past five years will be child's play compared to what's coming.


There's much more at the link, including more charts.  Bold and italic print are emphases in original.

Friends, this is extraordinarily important information.  It cuts through all the bluff and bluster of our politicians, and all the empty promises of the banksters.  It shows our economy as it really is.  If US fuel consumption has declined so much, and so steadily, and still hasn't bottomed out . . . we're in a world of hurt.  This is a highly accurate bellwether for the rest of commerce and industry.

I can't recommend too strongly that you click over to Zero Hedge and read the whole report for yourself.  It's that important.  As the Good Book tells us (albeit in a different context), "Whoever has ears, let them hear"!

Very good point. Our government only discusses the economy using smoke and mirrors !

Crude oils is a basic starter for a wide variety chemicals. No demand for finished products means no demand for starter materials.

It is not clear to me if Natural Gas is displacing liguid petroleum products. Do these charts include Natural Gas?