A last reunion before the end


If this report doesn't bring moisture to your eyes, I don't know what will.

Dying Sheila Marsh was given this one last chance to see her favourite horse after it was brought to her hospital bedside by caring staff.

The 77-year-old grandmother-of-four was clearly delighted as horse Bronwen gently nuzzled her just a few short hours before she died of cancer. 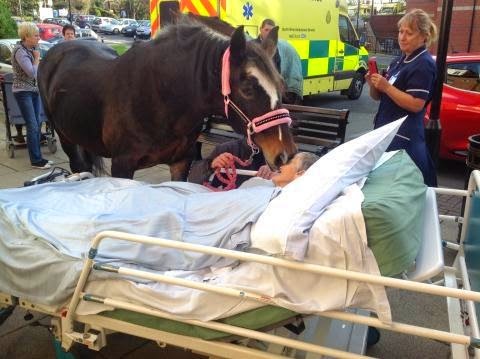 The scene - photographed at Wigan Royal Infirmary in Greater Manchester after staff moved the patient’s bed outside - reduced everyone to tears.

Daughter Tina, 33, said: “I was crying my eyes out and all the nurses were crying too.

"She took comfort out of it and it was a beautiful moment ... It was a matter of hours later that she passed away."


There's more at the link.  The picture is from Twitter.

A heartfelt "Well done!" to the hospital staff.  Thanks to them, Mrs. Marsh had the joy of a final reunion with something very special to her - might as well call the horse 'someone', come to that, given a bond that close.  That's really going the extra mile.  I wish more medical establishments would do likewise.

Sorry Peter, no chance. The lawyers, the insurance, and the money would get in the way.

Beautiful.
I have read the words and looked at the picture a couple of times and...-sri, my coffee went down the wrong way, gotta get rid of this lumpy brew stuck in my throat, catchya later.