I was intrigued to read a review of a book about the fall of the Berlin Wall, and its claim that the whole thing was 'an accident'. 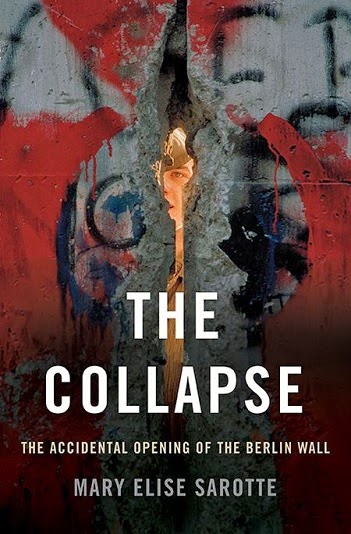 With regard to the collapse of the communist regime, Sarotte argues that the resistance was helped by the fact that Erich Honecker, the hardline leader of the Social United Party (as the East German communists called themselves), had cancer and was largely out of action in the critical summer of 1989. However, his regime’s general inclination was to crack down on dissidents and in particular to impose a Tiananmen-style solution, which had just happened that June, in Leipzig in an effort to intimidate the populace into submission. Egon Krenz, a young energetic member of the Politburo who opposed reflexive violence, planned an administrative coup against Honecker but failed to bring it off before the Oct. 9 protest.

Krenz did manage to overthrow Honecker in a Politburo a week later. Krenz shared Honecker’s commitment to the maintenance of communist rule in East Germany, but he preferred conciliatory rhetoric backed up with force only as a last resort. Accordingly, he set the bureaucrats in motion drafting a new law that would appear to ease travel restrictions to the West while actually having little effect in reality. The draft law was published in the newspaper on Nov. 6, but the public was outraged at the transparent ruse. Half a million people came out on the streets of Leipzig in protest. In response, the Politburo decided on a seemingly trivial concession: It would put “a portion of the draft’s wording on permanent emigration into effect immediately by fiat.” This was a fatal mistake for the regime in a way that nobody could have foreseen.

The bureaucrat assigned to draft the implementing language for this bit of legal legerdemain was a mid-level official of the Interior Ministry. He believed that the measures he was supposed to assist in implementing would be counterproductive to the security of the East Germany to which he was loyal. The measures allowed only for emigration without allowing East Germans who merely wanted to visit the West to return to their home and families. He feared this would lead to the depopulation of his country. Also, he feared that another ill-considered half measure might lead to a coup. Accordingly, he decided to follow the spirit but not the letter of his instructions. The result was language that gutted travel restrictions effective immediately. With minimal higher-level review, the text was inserted into the briefing book of Politburo member Günter Schabowski who had become the regime’s spokesman during the crisis.

At an early evening press conference on Nov. 9, Schabowski, in response to a question about travel restrictions from an Italian journalist, read the text aloud in front of the cameras. He was clearly unfamiliar with its contents but the damage was done. Soon, pandemonium broke loose as East Berliners started flocking to border crossings demanding to be allowed to visit West Berlin. Even then, the Wall remained closed until the senior duty officer at an obscure checkpoint overheard his superiors insulting him over an open phone line. The officer’s patience was likely strained after 12 hours on post, the last few of them facing down an unruly and growing mob that wanted to cross into West Berlin. Moreover, he was expecting to receive the results of medical diagnostic tests for cancer the next day. The insult was the straw that broke the camel’s back, as the officer soon snapped and angrily decided to start letting people out. Crowds rushed through the breach and it was all over. In a matter of days, the Wall was literally being chiseled to pieces. Krenz resigned in December and by October 1990 East Germany ceased to exist.

Lest all this be too encouraging to would-be revolutionaries and radical reformers today, Sarotte carefully warns her readers in the introduction that “this book shows how much has to go right—and it is a lot—to achieve such a success.” Overall, this is a story of complex interactions, unintended consequences and catastrophic success. Sarotte says that the opening of the Wall was “accidental and contingent,” the latter word being historian jargon for “it might have turned out another way.” She makes a convincing case.

Interesting book. I look forward to your review.

Here's an interview with the "senior duty officer at an obscure checkpoint," by the way (I know you were quoting the text):
http://www.telegraph.co.uk/news/worldnews/europe/germany/11213812/The-man-who-opened-the-Berlin-Wall.html

Something else to take away from this is the unelected, unresponsible and uncomprehending bureaucrat who makes the real laws without any oversight...........