The end of premium whisky?


I have to admit, I'm fascinated by this report.

A company in Oregon has launched a Kickstarter campaign to produce a wooden widget which, it is claimed, can dramatically improve the flavour of any whisky (or whiskey, for that matter) in just 24 hours.

Based on the premise that the two factors which distinguish a premium whisky from cheap supermarket hooch are "time" and "oak", Tony Peniche from Portland came up with a "whiskey element", a wooden stick (oak of course) covered in notches which mimics the effect of traditional barrel-ageing in a fraction of the time. 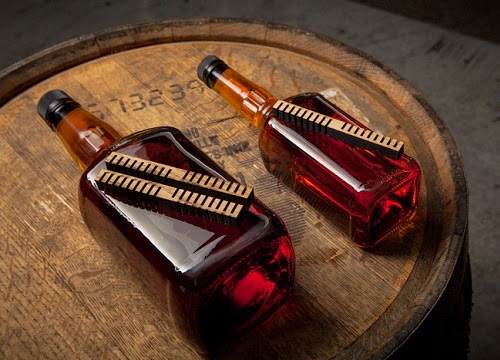 "The results were amazing," Peniche explains on his Kickstarter page. "They showed characteristics found in top-shelf aged whiskeys with notably higher levels of the chemicals responsible for good flavours and smells, as well as a significant reduction in Methoxy-phenyl-Oxime and Acetaldehyde [chemicals which contribute to hangovers]".


There's more at the link, and at the project's Kickstarter page (which includes a video clip).

So I could buy some ghastly cheap booze, stick one of these things in it for a day or two, and have it taste like a decent-quality single malt?  Sounds like a winner to me.  I wonder if it'll work on bourbon too?  (And will a 'whiskey element' cost as much as a bottle of premium whisky?  If so, no deal . . . )

Yeah, not believing it. Maybe it could impart some flavors that come with more aging, but I highly doubt it's going to turn some lowball J&B into 18 year Glenfiddich. Not going to happen.

Some things can't be rushed.

T'were I of mischievous mind, I'd wonder about whether the inventor's wife enjoys being told "But honey, using one of these means it doesn't need to last as long!"

A way to separate suckers from their money. I know a fair bit about whisky and whisky production (my wife runs a whisky business, we go to Scotland regularly for business, etc.).

If you like, you can put good quality oak chips into a container with crappy whisky, and it will pick up some flavor and color over a few weeks or months. It won't necessarily be good, but it will be less crappy.

Fine. So...why do you need a kickstarter to produce what is basically a fancy oak chip? The whisky won't care that the oak is nicely milled.

I forgot to add: the glass they show, the fact that they think ice belongs in good whisky, and some other things on their page... These people do not understand or appreciate good whisky or good whiskey.

Since I live in a moonshine area or at least one that has that heritage since nobody makes it anymore, :-) anyway I came up with the same idea believe it or not to improve the taste of shine only I was going to render the sticks into charcoal (easy to do) which would further filter the whiskey. It may not make it into fine stuff but it would make some of the low end product taste better.

Charred barrels and ageing impart flavour to whisky, not a damn stick. Anyway, he will never replicate the pure heaven of peated Islay whisky.

Sure, it'll give you all those wonderful compounds found in oak but that's only half the effect of aging. There are a number of other reactions unrelated to the barrel, not to mention the slight concentration due to the "angel's share".

The way I see it the only innovation here is to make the "elements" small enough to fit in a bottle. The idea of increasing the surface area of the oak isn't new. I take advantage of it all the time when aging beer and wine: http://www.northernbrewer.com/shop/infusion-spiral-pack-of-2-us-oak-medium-toast.html

Everybody has already said it, bit I'll go ahead and repeat in anyhow. Having the correct compounds, in the correct proportions, sufficient to fool a gas chromatograph does not mean that your tongue will not be able to tell the difference. That's why it is the art, as opposed to the science, of distilling.

This incipient product probably belongs in the same bin (i.e. discounted remainders) as those products that claim to "age" and improve wine via the magic of "patented neodymium magnets!" or some mystical "venturi effect" you get from a pourer-thing jammed into the neck of the bottle.

The best argument I've heard for why these things are likely to be bullshit is: If it really worked, don't you think the established manufacturers would be using it already?

Too bad, because it'd be nice if such things really did work.