November 19th is National Ammo Day.  (Click the image for a larger view.) 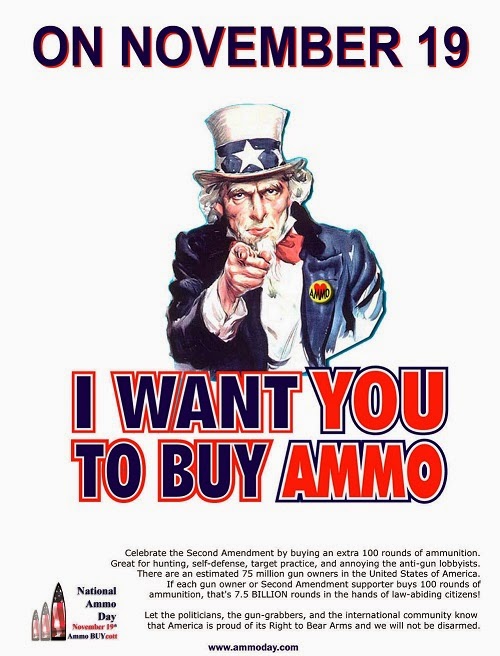 The goal of National Ammo Day is to empty the ammunition from the shelves of your local gun store, sporting goods, or hardware store and put that ammunition in the hands of law-abiding citizens.  Make your support of the Second Amendment known—by voting with your dollars!

There are an estimated 75 MILLION gun owners in the United States of America.  If each gun owner or Second Amendment supporter buys 100 rounds of ammunition, that’s 7.5 BILLION rounds in the hands of law-abiding citizens!

The gun/ammunition manufacturers have been taking the brunt of all the frivolous lawsuits, trying to put these folks out of business.  Well, not if we can help it!  And we CAN help it by buying ammunition on November 19!

I submit that it's particularly important to send this message in the light of the new, underhanded tactics being tried by the anti-gun lobby.  The recent passage of initiative 594 in Washington state is a classic example.  No Lawyers - Only Guns And Money has an excellent two part summary of what it means for shooters there.  He points out that Washington was the first state in which this approach has succeeded, but if Bloomberg and his ilk have anything to say about it, it won't be the last.  Such laws make it legally impossible to introduce anyone to the shooting sports, because they make it illegal to allow them to touch, inspect or shoot any firearm unless and until it's been transferred to them.  That's iniquitous - but it's probably exactly what the anti-gunners intended all along.  Go read Part One and Part Two of his essay.  It's chilling.

Let's send a message tomorrow by buying bullets, rather than firing them.  If enough of us do so, we'll be heard . . . and I'd far rather be heard through my wallet than through the muzzle of a rifle.  There's no turning back from that.

This may sound like a bit of a stretch, but I'm wondering if Washington state's I-594 couldn't be neutered by a challenge on the 5th Amendment takings clause.

".... nor be deprived of life, liberty, or property, without due process of law; nor shall private property be taken for public use, without just compensation."

Courts have, with some frequency, interpreted government action which reduces the value of property to constitute a "taking" by government, requiring compensation to the injured party.

Should Party A wish to allow Party B to possess (and it needs to be remembered that with firearms "possess" has strict legal meaning - it means to come into physical contact with a firearm, such as touching it or holding it, so Mary handing her gun to Sally constitutes Sally's legal possession of the gun at the moment the gun touches Sally's hand) I-594 requires a legal transfer of the firearm from Party A to Party B, conducted by a federally- and state-licensed firearms dealer (eg., an "FFL") and a background check.

The FFL will charge for that legal transfer because of the record keeping expenses and legal liability associated with the legal requirements of an FFL, and most states charge FFLs for background checks associated with transfers, which the FFL passes along to the customer.

So, in the example above, either Party A or Party B must pay the FFL for the transfer and background check; this expense is will be incurred as part of compliance with the requirements of I-594.

So, either FFLs have to do transfers for free, and not charge customers for the background check (good luck with that), or Washington state has just mandated a non-tax fee to participants. IANAL, but that may constitute a "taking."

And, on a separate but related issue, suppose Mary and Sally do perform the now mandatory FFL-processed transfer so Sally can use (legally "possess") Mary's gun; should Mary trust Sally to engage in the legal transfer required to give Mary's gun back to Mary? Or should gun owners in Washington state (such as Mary) insist on compensation (in this case, from Sally) equal to the gun's value in case, for whatever reason, the gun is not, or cannot be, transferred back to Mary, the original owner?