I went down to my favorite local gunshop this morning to invest a few hard-earned dollars in lead, copper, brass and propellant in honor of National Ammo Day.  I came away with 800 rounds of .22LR:  500 rounds of CCI MiniMag 40gr. LRN, and 300 rounds of Winchester's Hyper Speed 40gr. JHP round.  (I'm very glad to report that the shop always seems to have .22LR in stock.  Right now they've got upwards of 10,000 rounds on their shelves - at reasonable prices, too.  That's one of the reasons I keep going back there.)

The Winchester round was apparently introduced in 2009, but I'd never seen it before - and it's no longer listed on Winchester's Web site, so it may already have been withdrawn or superseded. 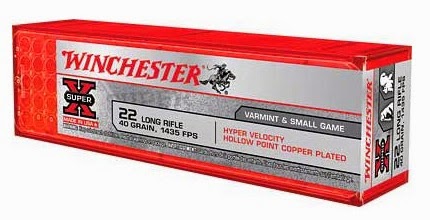 It is/was their attempt to match the CCI Velocitor round, which it claims to do exactly in both bullet weight (40gr.) and velocity (rated at 1,435 feet per second).  The Velocitor has for years been my #1 recommendation for defensive use in .22LR (see my earlier article on that subject), as it propels a full-weight 40gr. projectile at a considerably higher velocity than standard, giving it better penetration than the (lighter but faster) CCI Stinger load.  Since no .22LR is going to deliver much of a shock to a human frame, the deeper penetration is needed, IMHO, to get through bone and bulk to vital organs.

I'm going to test the Winchester load over the next few weeks.  If it performs as well as the CCI Velocitor, and if it's still widely available, it'll become a recommended alternative to the latter load.  Having not found it on Winchester's Web site, however, I'm worried it may have been discontinued.  There have also been quality control problems with recent Winchester bulk rimfire ammo, which I hope won't carry over to its more expensive lines.  I guess we'll have to find out the hard way.  Oh, bother . . . testing ammo . . . what a chore . . . (NOT!)

So, what did you buy for National Ammo Day?  Let us know in Comments.

Labels: Boys and their toys, Firearms, Idle chatter, Me me me, Self-Defense, Warm Fuzzy Happy Stuff
Email ThisBlogThis!Share to TwitterShare to FacebookShare to Pinterest

What is commonly known as a speed ball. Ammo can loaded with 420 rounds in stripper clips and a speed loader for the 5.56 I have about.