In Britain and throughout the Commonwealth, tonight is celebrated as Guy Fawkes Night - the date in 1605 when plotters planned to blow up the House of Lords in England, together with the reigning Monarch, James I.  There were several involved in the so-called 'Gunpowder Plot', but the name of Guy Fawkes is best-remembered because he was captured in a vault beneath the House of Lords, where he was standing guard over 36 barrels of gunpowder. 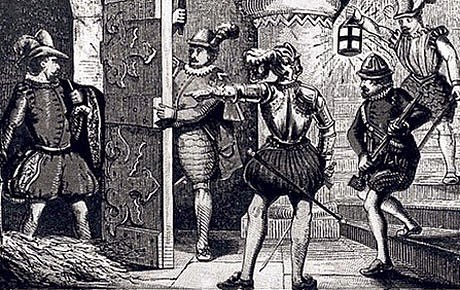 Most of those convicted were hanged, drawn and quartered as punishment for their crime.  Fawkes 'cheated the executioners' by leaping from the scaffold as soon as the rope had been placed around his neck, dying before he could be put to the final torture.

The Gunpowder Plot has been celebrated in English culture ever since it was discovered.  I remember, as a small child, being taught to chant the doggerel verses that are still sung by children today.

Please to remember the Fifth of November
Gunpowder, treason and plot.
I see no reason why gunpowder treason
Should ever be forgot.


And then there's this one, sung or chanted while pushing around in a wheelbarrow or on a cart a scarecrow-like figure made of straw stuffed into old clothes to resemble the fabled Guy Fawkes:


The 'guy' was then burned atop a bonfire that night, along with the setting off of as many fireworks as could be bought using the money raised by demanding 'Penny for the Guy!' from passersby while pushing the effigy around the streets.

Of course, the Gunpowder Plot was deadly serious.  It probably wouldn't have had the desired result of restoring Catholicism as the 'ruling faith' in England - in fact, it would most likely have lead to savage anti-Catholic persecutions and the deaths of many of the plotters' co-religionists - but the explosion would certainly have killed those in the House of Lords that night.  A British television documentary built a replica of the building some years ago, which was tested by exploding a similar quantity and quality of gunpowder beneath it.  The results were impressive, to say the least.  I wish they'd left out the ultra-dramatic music and endless repetitions of the blast, but it's impressive nonetheless.  Watch it in full-screen mode for the best effect.

"The only man ever to go to Parliament with honest intentions...."

Off topic, Peter, but you might get a laugh it of this one. ;)