Following my recent article about binoculars, I've had several queries from people who are on very tight budgets.  In so many words, all of them asked which was the best low-cost pair of compact binoculars for those who couldn't afford something better.

This is a difficult question to answer, because optical performance varies dramatically between low-end and high-end units.  Even in units of the same magnification and lens width, and of roughly the same size, the difference can be huge.  User reviews of them on Amazon.com and elsewhere highlight this - the cheaper units usually get lower ratings than the more expensive ones, sometimes profanely so.  Personally, I'd suggest looking only at binoculars with a 4-star or higher average user rating.

In that range of user ratings, and based on my own experience with most of the models mentioned, here's a short list of binoculars to choose from.  Note that there are many other models out there, but if I haven't personally handled one, I won't mention it here.  I've divided them into two groups based on optical performance.

GROUP ONE:  Budget binoculars - price is everything.  Ranked in order of cost on Amazon.com, low to high (all offer free shipping):


All of these models are basically similar;  in fact I wouldn't be surprised to learn that their lenses are made in the same Chinese factory.  Some are visually almost identical, despite their different brands (and don't let the brands fool you - for example, the Pentax binoculars have the brand name only on the supporting materials, not on the binoculars themselves, so I presume it's nothing more than a licensed [?] use of the name without true Pentax optics inside the barrels).  All offer pretty much the same performance, which is (in my opinion) nothing to write home about.  They're functional, but nothing special.  None of them are rated to be waterproof or fogproof, despite impressive-sounding claims of 'rubberized construction' and the like.  (I own several of the Tasco units, treating them as disposable backups to my better binoculars or as trade fodder.)


GROUP TWO:  Better binoculars - still relatively low-priced, but with superior optical performance.  There are two that I recommend based on my experience (I currently own one of each).


If you compare these two units side-by-side with any of the cheaper units in Group One, you'll immediately notice a difference.  They transmit more light, colors come across more brightly, their lens sharpness is definitely superior, etc.  I use the Bushnell binoculars outdoors, where their waterproof and fogproof features have come in handy more than once.  The Olympus unit is tiny and very lightweight, but despite its smaller lenses transmits light even better than the Bushnell thanks to its excellent lens coatings.  It's ideal for pocket carry, but it's not waterproof or fogproof, so I tend to reserve it for use in my home or vehicle.  I wouldn't want to use it outside in inclement weather - that's why I keep the Bushnell on hand.  At the moment it's sitting on my desk, in case I want to look at a passing bird or anything else of interest.


I should add that the Olympus Roamer unit (shown below) has an undeniable cuteness factor.  It's tiny, featherweight, and a lot of fun to use - it's literally made a couple of people go squeeee!  I have to admit, that's why I keep it.  I could easily do without it, because I have plenty of others, but I just plain like its ergonomics. 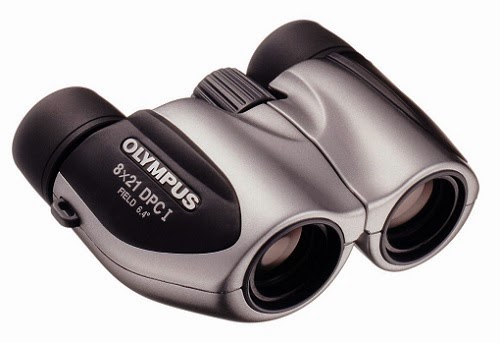 I do recommend going for a larger pair of binoculars if you can afford a better-quality unit (specific makes and models were discussed in my earlier article).  However, if you're on a budget, those listed above will give you a start.  Just don't expect optical miracles from Group One units!  (Note that you can get larger binoculars at very low prices, such as this Vivitar 7x50 unit for $9.94 plus shipping.  However, its average user rating is only 2.3 out of 5 stars, and user comments indicate serious deficiencies - enough to suggest it's not worth buying.  I regard Amazon.com's user ratings as an essential part of my selection process.  I look for items with as many reviews as possible, and an average rating of about 4 stars or better out of 5.  If an item gets less than that average, or has very few reviews, I usually won't consider it.)

As a matter of interest, if you ever have the opportunity to compare good-quality binoculars in similar magnifications but different physical sizes, it's a very educational experiment.  After writing my earlier article, and in preparation for this one, I lined up the following binoculars next to each other and examined the same scene in turn through each of them.  In order of size, they were:


It was an eye-opening comparison (literally!).  The Vanguard 8x42's, with their outstanding lens quality and coatings and much larger lenses, were like day versus night compared to the Tasco 8x21's, and the Bushnell 8x32's also outperformed the smaller units.  I suggest you try a similar comparison if you get the opportunity.  However, remember that the higher the magnification, the smaller the exit pupil ratio and the less light they'll transmit.  That can make a big difference in low-light situations such as dawn or dusk.  It's why I stick to binoculars with no more than 8x magnification for preference.

EDITED TO ADD:  I've also put up a video clip on how binoculars are made, if you're interested.

Good point, it IS all about light... sigh

Good prices on optic's here, mostly refurbished and trade in's, warranty's are included with most too.
http://www.samplelist.com