I was asked today why, in previous articles, I've recommended Crimson Trace laser sights for pistols over all other brands.  My correspondent pointed out:

Most other laser sights are half the price of the Crimson Trace equivalent, and work just as well.  Why should I pay double for the CT version?


I admitted that he was quite correct about the pricing:  but cost isn't everything.  I thought some of you might like to hear my explanation.

Let me begin by emphasizing that I don't earn anything for recommending Crimson Trace - no endorsement fees, no free products, nothing like that.  I recommend them because, in my experience, their products perform as advertised, and they have one significant advantage that no other laser sight has.

Most people who've been in a few fights - whether involving fists, knives, guns or whatever - will confirm that things happen fast.  It's seldom like the movies, where there's a build-up of tension, an exchange of words, mood music, lowering light levels, and all the other signs saying that violence is about to erupt.  Look at some video clips of the so-called 'knockout game' circulating on YouTube, or some of the mugging attacks caught on camera.  You'll notice most of the attacks come out of nowhere, with little or no warning.

That's where many (but not all) models of Crimson Trace laser sights have a priceless advantage that others lack.  They work by what CT calls 'instinctive activation':  as your hand grasps the firearm, your finger instinctively and automatically depresses the activation button for the laser, which is positioned on the grip itself.  The button is highlighted by the red arrow in the illustration below. 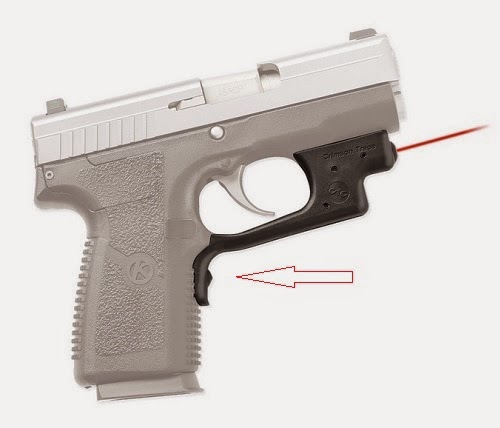 On some models the button's at the back of the grip, rather than the front:  but wherever it is, you don't need to use another finger or your other hand to activate the laser.  It comes on as you grasp your gun.  I've learned the hard way that when the proverbial brown substance hits the rotary air impeller, simplicity is speed, and speed of reaction is what will most likely save your life.  You almost certainly won't have time (or a safe distance) to activate a laser using both hands.  It'll take too long.

There's also the factor of your position.  If a mugger has just knocked you down, and you're trying to react to save yourself before he stomps you, you won't have time to fiddle with your gun.  You're on the ground, unable to take a firm two-handed firing grip and leisurely align your firearm's sights on your target.  Your support hand will be trying to lever you up off the ground or fend off a blow or kick - you can't spare it to grasp the gun or fiddle with a laser sight.  If you can simply grab your gun and have its laser sight come on instantly, so that whatever your position and wherever the gun may be, you can simply put the dot on your attacker and pull the trigger . . . that may make the difference between you walking away from the attack, or ending up in the hospital - or the morgue.

There are a few other instant-on options.  Viridian, for example, offers waistband holsters with a built-in 'switch' that activate its laser sights the instant the gun is drawn.  That's fine, if you're carrying in a waistband holster.  If (as I often do) you need a type of holster they don't offer, or are carrying a smaller handgun in a pocket holster, that won't work . . . whereas the CT system will.

I'm not trying to say that the products of other laser sight manufacturers are technically inferior.  They're not - they work just fine (mostly) and are often cheaper than Crimson Trace equivalents.  However, they lack the 'instinctive activation' feature that CT patented some years ago.  (Yes, I think CT's prices are unreasonably high:  but they're charging what the market will bear.  Since they're the only company to offer grip-activated lasers, if we want that convenience, we have to pay for it.  That makes life difficult for my disabled and handicapped students, many of whom have enough trouble affording guns and ammo, let alone laser sights . . . but CT isn't a charity, and we can't expect it to operate like one.)

To date I've installed CT grip-activated laser sights on Ruger LCP's and LC9's, various models of Springfield XD's, Glocks and Kahrs, Smith & Wesson and Ruger revolvers, and a few long guns.  I've never had one fail me or a student when it was needed (as long as one's made sure to replace the batteries as and when required), and the instinctive activation feature has proved its worth on more than one 'social use' occasion.  That's why I'll be buying more of them, despite their relatively high price.  In my experience, no other laser sight works as easily and instinctively on a handgun in the heat of the moment.

Boy, I would really like to recommend the Viridian auto activate lasers since I like other Viridian products...but I can't. I bought one of the auto-activate models based on my great experience with other Viridian products and first two of the screwheads stripped out and then it quit working altogether. Could I have been ham- handed on the screws, maybe, but I used to torque parts of explosive devices together to an inch ounce accuracy for a living so I have a tendency to be very careful while torquing anything. Now if CT only made lasers that were in the green part of the spectrum. EdC

For my M&P the CT grips fit in current holsters. The cost of new holsters would have much exceeded the cost difference between the CT and other products.

+1 on CT LaserGrips. They're excellent, and I have several
training guns equipped with them, and they're invaluable. I adjust the dot on them for 5" right and 5" low at 25 ft - if I see the dot about 1-2 inches off the plate at about 4:30 on the cardboard backer (I start beginners on 9" paper plates - real cheap, simple, no target "rings" to confuse them) then I know the student has good center-target sight alignment, and beginners are usually so focused on the front sight they don't even know the gun has a laser, because activation is instinctive. (If suddenly the holes start appearing high and left, off the plate, they've discovered the dot and are using it instead of the sights. Time for remedial sight instruction).

I've also got them on the guns I carry daily, and they're excellent as backup to the sights, and as Peter pointed out, under adverse conditions they're about the only sighting system that works at high speed.

Pro tips: 1) On CT LaserGrips that have a side-mounted laser they need to be adjusted to align with the sights at a specific distance because the beam will be slightly tangent to bore centerline. Bear that in mind if you're faced with need for precise bullet placement.

2) Buy batteries in bulk and replace them frequently (I replace batteries quarterly - I'd rather spend a few bucks more on batteries than discover the LaserGrip doesn't work. CT offers free replacement batteries, but I've never used that service, I just get them from amazon a couple dozen at a time).

3) It's easy to become "laser dependent" and use the dot instead of the sights. I suggest teaching yourself to use the dot to confirm your sight alignment (and work on your natural point of aim) rather than as your primary sighting system.

Crimson Trace is also a regular supporter of the Gun Blogger Rendezvous, an annual fundraiser for veterans. That gives them a couple of extras stars in my book.

Applause for CT here, too. I'm a dinosaur when technology or new products are concerned but I have a CT laser on my Smith 642 and it is an awesome upgrade. It's simple, rugged, dependable and idiot-proof. Can't find a downside to it s long as you train with it as an adjunct to the gun and don't get totally dependent on it alone. The pistol still has sights--use them together on the range or when dry-firing.

Your points are all good. The problem I have with this type of laser, though, is the button throws off my grip. It is right under the middle finger of my shooting hand, and I seem to grip harder with the middle finger than with the others. So, I only use this type laser on my CCW. I figure if I ever need to use it, I probably won't be getting the time and space to be as accurate as I can putting holes in non-threatening paper targets. Pointing the muzzle in the general direction of a threat and pulling the trigger when the target is illuminated might just be the best I can do. So, yeah, I agree with you, I just wish the button did not bother me as much.