That's not a yawn!


I was both amused and irritated to see this photograph in a gallery of animal images at the Telegraph.  (Click it for a larger view.) 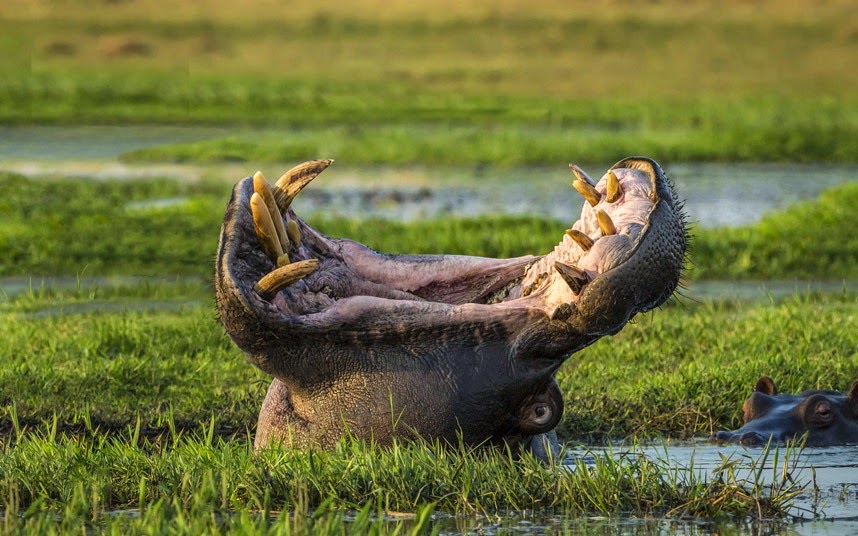 The caption read:  " A hippo yawns in Chobe National Park in Mozambique".  Unfortunately, it's not correct.  For a start, Chobe's in Botswana, not Mozambique - but then, what's a thousand-mile error between friends?  Secondly, and more seriously, that's not a yawn.  That's a threat display.  The hippo is showing its fighting tusks, ivory 'teeth' that can tear great chunks out of a rival hippo, or dismember a crocodile . . . or rip you apart if you provoke it.  That's what its actions are saying to the photographer.  "You worry me.  If you come any closer, I'm going to do something about you - and you won't enjoy it!"  Look at the animal's only visible eye.  It's not closed or screwed up, as is natural in a yawn.  It's looking right at the photographer to see if he/she got the message.

During my many years in Africa it never ceased to amaze me how absolutely, blindly stupid tourists could be about animals.  They would never believe our warnings, thinking that we were joking with them or trying to scare them.  When (as inevitably happened) some of them got into difficulties, their reaction was to blame us for not warning them sufficiently!  Let me give you a couple of examples.

A group of kayakers from Europe decided to travel down the Zambezi River.  I was present when they were warned about precisely the kind of threat display illustrated above, and told explicitly, "Don't paddle too close to hippos - they won't like it, and they'll attack."  One of them actually had the gall to laugh at us and mention the dancing hippos in Walt Disney's 'Fantasia'!

Unfortunately, Disney's dancers had (and still have) nothing whatsoever to do with reality.  At least one of the kayakers didn't listen, as was demonstrated a few days later when he paddled too close to a hippo.  His body was never found;  the crocodiles probably got whatever the hippo left.  The remains of his crushed, well-chewed canoe were recovered a few miles downstream.  (Yes, his traveling companions vociferously blamed local authorities for not signposting the river at least every mile concerning the dangers of hippos, crocodiles and ingrown toenails . . . after all, they couldn't be expected to believe verbal warnings from ordinary people like us.  We weren't 'official'.  We weren't certified experts!)

In another incident, a female tourist from the USA visiting a game reserve spotted a small lion cub on the other side of a fence.  (Its mother was recovering from injuries, which is why the two of them were in the protected enclosure.)  Before the astonished guide could stop her, she put her arm through the fence to try and pet it.  Its mother, hitherto unnoticed in the bushes just beyond the cub, must have assumed she was trying to harm her cub, because she promptly ripped the flesh from the woman's arm.  Only bones and a few tendons were left;  what remained had to be surgically amputated.  The woman actually had the gall to try to sue the game reserve for not posting warning signs and armed guards to prevent her from doing something like that - this despite having been clearly and repeatedly warned during the introductory lecture, prior to the walking tour, not to approach, pet or talk to any animals whatsoever!

My wife and I were visiting Yellowstone and it was far enough into the past that we were using a film camera. The traffic jam ahead meant something was interesting so we parked well off the road. The interesting thing was a mother grizzly and two cubs. After a few moments a tourist began to walk towards the bears. My wife turned towards me and said, "What are you going to do?" I replied, "I am going to get some amazing photos." A ranger intercepted the tourist before the inevitable.

All the world is a petting zoo, didn't you know? "Nature, red in tooth and claw" just isn't something that most people in Europe and the US have ever come into contact with.

This really should change. Adults and children alike need to understand the difference between reality and Disney. Remember the outrage, when a zoo fed its lions recognizable chunks of a giraffe, instead of anonymized chunks of meat? That shouldn't have been an outrage, or even unusual.

Oh, just wanted to add: a couple of pictures on there is one of a crocodile having grabs a gnu at a herd crossing point. The caption: This heart-breaking picture shows a plucky gnu trying to escape the jaws of a hungry crocodile"

I always find captions like that rather odd. Why isn't it: "starving crocodile risks life and limb to snatch meal from the middle of a stampede"?

I visit Yellowstone NP three or four times a year. I don't see something stupid every time; my early and late season visits feature few tourists. More than once I've seen someone trying to pose their child next to or ON TOP of a bison. At one time the Cody, WY hospital had a sign listing the top ten reasons for visiting their emergency room. Bison related injuries were prominent on the list.
It's not just animals. Many visitors appear to believe that, unless there's a sign or (better) a fence, the rules of nature are on vacation in the park. So, every year a few learn that you bounce several times and probably stop long before you hit the bottom at Canyon. Idiots.

I once saw a woman from New York try and get her twin three year olds to "pet the pretty deer". In Yellowstone. It was a bull Elk. When the Ranger Stopped her and made her take her children back to her Caddy, she screeched " If the animals are so "F"ing dangerous. Why do you let them out of their cages?" You cannot fix stupid. ---Ray

It's not just Disney with their cutesy, friendly, cuddly, lovable bears, lions and tigers...

Consider Charmin Toilet paper with their cutesy lovable bears who want clean butts after they poop - in their bear bathroom - in their modern bear house.

Kids eat that stuff up and grow into totally ignorant adults when it comes to animals.

But so what? We have 7 billion humans wandering around consuming and polluting, most of who will lead completely useless and wasted lives. We shouldn't miss a few who ignore warnings.

Peter, here's a commentary from the late Jeff Cooper in Jan 1996 regarding hippos. Not exactly the circumstance you detailed, but still relevant.

"One of the things that we look forward to in the New Year is the chance to confront an angry bull hippo on dry land. Arrangements have been made.

The question will arise as to why the hunter should choose a hippo, especially since over the great hunting days of Africa this beast was never considered to be a game animal. He does, however, offer some interesting possibilities. Shooting him in the water is not exciting. While he has been known to attack and destroy a boat, he usually simply sinks and dies under water. On the other hand, if you can insert yourself between a night-grazing hippo and his river, he may afford you as much excitement as you desire - perhaps more. His bulk is enormous and the problem of proper bullet placement is daunting. In his rush for water he is all but unstoppable, and his bite can easily cut a man in two. (We know of two outfitters who will not undertake this operation, believing it to be too dangerous.)

If and when you get your hippo down, various positive features appear. His hide is supposed to make the best leather in the world. His meat is highly prized by the local people, and his rendered fat is considered to be a sovereign remedy for everything from malaria to sprained ankles. His ivory is distinctly superior to that of the elephant for the manufacture of jewelry and accessories, being denser and finer in grain.

Among other things, this adventure will give us one more excuse to take Baby afield. We will use 500-grain solids, and when the opportunity presents itself we will shoot with extreme care."

It's weird what animals people fear.

Arachnids? I don't know if there's any spider that can actually kill a healthy adult, especially not with medical attention. Ditto, more or less, with scorpions, I think.

Snakes? There's a list of known fatal snake bites in the US on Wikipedia in the last two centuries or so, and it isn't very long. Meanwhile, most snakes would happily not bite you in the first place; consider how much snake handling by idiots go on without death. Mind you, venomous snake bites are serious, but you can still survive them with proper treatment.

Hippos? People laugh when you tell them they're deadly.

(The "You didn't tell me!" excuse exists about everywhere, though. People get away with it because usually the consequences are not being chewed apart by a wild animal.)

ADDENDUM TO THE ABOVE:

See also: loans. I've heard of college students freaking out the day after graduation when Mr. Creditor comes knocking on the door. I'm sure the recovery agency will be SO sympathetic when you tell them you weren't warned that you'd have to pay the loan back.

We have tourists up here every year who approach grizzlies, moose, elk and wolves for the purpose of getting just one more picture.

They don't listen to warnings, and they never, ever stop to consider what "wild animals" means.

That picture reminded me that I have to call my sister.

Yellowstone 1994.
Mother with Kodak Instamatic calls to children "Get closer to the buffalo cub!"
Alas ... the gene pool was not cleansed that day. Mr. Ranger did his job.

Horses bite and kick. Nearly every state has laws protecting the equine owners, not the brain dead public.
https://www.google.com/search?q=equine+sign&rlz=1C1CHFX_enUS535US535&espv=2&biw=1280&bih=909&source=lnms&tbm=isch&sa=X&ei=epB6VM-4MsvZsATIrYDADA&ved=0CAcQ_AUoAg

I grew up in Alaska. There are a few bears there. I figure they have to eat, too, and importing meat-I mean tourists, is better than them sampling the locals.
Some folks just ain't that bright.

I once drove from Rustenburg, SA up to Victoria Falls and noted many elements of daily life in those countries that would not be allowed in the US.

While at Victoria Falls, it was amusing to see the "barriers" keeping tourists away from the cliffs were knee high fences made of woven thorns. They were quite easy to step over and quite a contrast to the tourist control barriers that you would see at virtually any water fall in the States.

Made me think of the picture of a Polar bear on a floating chunk of ice, perched on what looks like an ice column, on an article about melting ice caps, global warming and raising sea level.