The Daily Mail reports on a competition held in Canada yesterday.

It is a competition not for the fainthearted, but several brave Canadians rose to the challenge at the Clovermead Bees & Honey, Bee Beard Competition in Ontario yesterday. 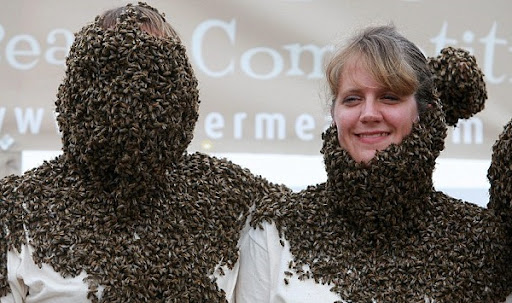 Beebearding is thought to date back to the 1700s when an English beekeeper discovered he could create a beard of bees by tying the queen to a thread around his neck and would parade through the streets wearing the unusual costume.

In a recent interview with The Australia Telegraph, professional beekeeper Melanie Kempers explained the beard process.

'Every colony has one queen,' she says. 'They all recognize her by smell. We put her in a small plastic cage and tie it around the neck, and we take the bees from her colony.

'We put them onto newspaper, and then pour them into a pair of hands just below the queen. They smell her and walk up towards her. Once they smell her, they huddle around her, that’s what creates the certain look.'

There's more at the link, including many more photographs.

There's just one thing I want to know. How the hell do you get those bees off when you've finished competing???

One really hopes for no sneezing and no hiccups during one of these sessions!...

Wow! I can't imagine that, bees around your face... That's pretty awesome. They are so brave.