If this is real, hanging's too good for them!


I'm astonished (and infuriated) to read what appears to be an official solicitation for prostitutes, allegedly issued by the administration of the Imam Reza Shrine in Mashhad, Iran. 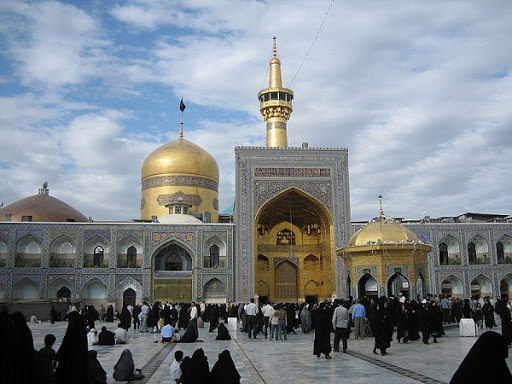 The translation provided reads as follows:

Temporary Marriage (Marriage is among the traditions of the Prophet Mohammad)

In order to elevate the spiritual atmosphere, create proper psychological conditions and tranquility of mind, the Province of the Quds’eh-Razavi of Khorassan has created centers for temporary marriage (just next door to the shrine) for those brothers who are on pilgrimage to the shrine of our eighth Imam, Imam Reza, and who are far away from their spouses.

To that end, we call on all our sisters who are virgins, who are between the ages of 12 and 35 to cooperate with us. Each of our sisters who signs up will be bound by a two year contract with the province of the Quds’eh-Razavi of Khorassan and will be required to spend at least 25 days of each month temporarily married to those brothers who are on pilgrimage. The period of the contract will be considered as a part of the employment experience of the applicant. The period of each temporary marriage can be anywhere between 5 hours to 10 days. The prices are as follows:

After the expiration of the two year contract, should our sisters still be under 35 years of age and should they be so inclined, they can be added to the waiting list of those who are seeking long-term temporary marriage. The employed sisters are obligated to donate 5% of their earnings to the Shrine of Imam Reza. We ask that all the sisters who are interested in applying, to furnish two full-length photographs (fully hijabed and properly veiled), their academic diplomas, proof of their virginity and a certificate of good physical and psychological health which they can obtain through the health and human services of the township of their residence. Please forward all compiled material and send to the below address by the 31st of the month of Ordibehesht, 1389 (May 21st, 2010).

Attention: For sisters who are below 14 years of age, a written consent from their fathers or male guardian is required.

For further information, please refer to the Quds’eh Razavi website.

The original document (in Farsi) is reproduced at the link.

I know that different cultures are to be respected, and all that sort of thing . . . but to baldly state that applicants under fourteen must have the written approval of their father or male guardian??? What normal female child would even consider going into a life of prostitution, with all its dangers? This is as good as an open invitation to fathers and male guardians to pressure their relatives into doing so!

If this is real (and I remain open to the possibility that it's a hoax perpetrated by some anti-Iranian group; hopefully further facts will emerge from other sources to confirm or deny it) then I can't think of any punishment harsh enough for those responsible for this offer - or those who pressure their female relatives into 'accepting' it. One can only hope and pray that the God they purport to honor at the Imam Reza Shrine will speedily bring His justice to bear upon them. Since they honor Jesus Christ as a prophet, albeit not as the Son of God, they might want to reflect upon his words in Matthew 18:2-6;

Then Jesus called a little child to Him, set him in the midst of them, and said, "Assuredly, I say to you, unless you are converted and become as little children, you will by no means enter the kingdom of heaven. Therefore whoever humbles himself as this little child is the greatest in the kingdom of heaven. Whoever receives one little child like this in My name receives Me. Whoever causes one of these little ones who believe in Me to sin, it would be better for him if a millstone were hung around his neck, and he were drowned in the depth of the sea."

I do most sincerely pray that Jesus' words may come true for those responsible for this abomination.

Peter, I have read before that the Shiites (Iranians mostly) do practice these temporary marriages to keep the men "pure". It would be a laugh if it weren't so awful.

We seem to be back to the time of temple prostitutes. Yes, the Shia have the temporary marriage, lasting anywhere from a few weeks to a year, but according some Iranian associates of mine, this is not what it is supposed to be for. They are disgusted.
LittleRed1

I'm a little confused. I thought the Farsi saying was "boys are for sex, women are for children".

Dr. Sanity isn't writing anymore, but it's all still online. Go to
http://drsanity.blogspot.com/ and scroll down to Wednesday, March 31, 2010 the article titled BAD ROMANCE I believe the good doctor is a flight surgeon/psychiatrist for NASA. I'll go with her expertise.

Perhaps hanging them from another apendage rather than their necks would be appropriate? I can think of one such that might fit the crime!

what dangers involved with prostitution????

The only dangers that come from prostitution are a result of the fact that its illegal and that is the nature of something in a black market, In areas where prostitution is legal, the regulations in place make it a very safe and even profitable profession.