On August 6th, 1945, the first nuclear weapon used in combat was detonated over the Japanese city of Hiroshima. Something like 70,000-80,000 people were killed instantly, and a similar number injured. Many of the latter would die in the months and years to come, due to the longer-term effects of radiation, which were little understood at the time. 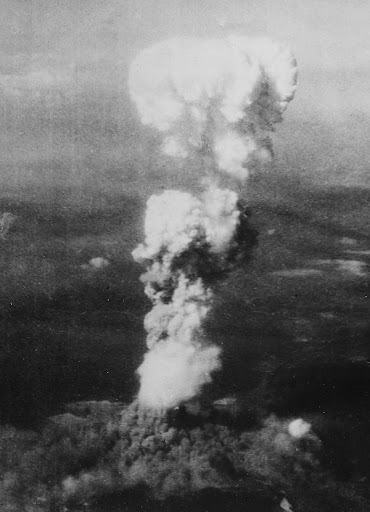 Today a US representative attended the anniversary commemoration in Hiroshima, the first time this country has been represented there. Despite comments from some who found that distasteful, I think it was appropriate. Our enemy of 65 years ago has become our ally and partner. It's only respectful to join in such a commemoration.

Something of which few Americans are aware is how much international co-operation went into making the Manhattan Project a success. Probably more than half the physicists and other scientists who worked on the Bomb and in related projects were not US citizens. Many, ironically, were refugees from Nazi Germany, driven out by that country's anti-Semitic policies. Britain and her Commonwealth contributed more than a few as well.

To illustrate the international nature of the Manhattan Project, I thought it might be appropriate to reproduce the press release crafted by Winston Churchill after the bomb was dropped. He'd already been replaced as Prime Minister of Great Britain, but had prepared this statement for release at the appropriate time. It illustrates how Britain was fully involved in the research that led up to the Hiroshima attack.

By the year 1939 it had become widely recognised among scientists of many nations that the release of energy by 'atomic fission' was a possibility. The problems which remained to be solved before this possibility could be turned into practical achievement were, however, manifold and immense; and few scientists would at that time have ventured to predict that an atomic bomb could be ready for use by 1945. Nevertheless, the potentialities of the project were so great that His Majesty's Government thought it right that research should be carried on in spite of the many competing claims on our scientific manpower.

At this stage the research was carried out mainly in our Universities, principally Oxford, Cambridge, London (Imperial College), Liverpool and Birmingham. At the time of the formation of the Coalition Government, responsibility for co-ordinating the work and pressing it forward lay in the Ministry of Aircraft Production, advised by a Committee of leading scientists presided over by Sir George Thomson. At the same time, under the general arrangements then in force for the pooling of scientific information, there was a full interchange of ideas between the scientists carrying out this work in the United Kingdom and those in the United States.

Such progress was made that by the summer of 1941 Sir George Thomson's Committee was able to report that, in their view, there was a reasonable chance that an atomic bomb could be produced before the end of the war. At the end of August, 1941, Lord Cherwell, whose duty it was to keep me informed on all these and other technical developments, reported the substantial progress which was being made. The general responsibility for the scientific research carried on under the various technical committees, lay with the then Lord President of the Council, Sir John Anderson. In these circumstances (having in mind also the effect of ordinary high-explosive which we had recently experienced), I referred the matter on August 30th, 1941, to the Chiefs of Staff Committee in the following minute : —

"Although personally I am quite content with the existing explosives, I feel we must not stand' in the path of improvement, and I therefore think that action should be taken in the sense proposed by Lord Cherwell, and that the Cabinet Minister responsible should be Sir John Anderson.

"I shall be glad to know what the Chiefs of the Staff Committee think."


The Chiefs of the Staff recommended immediate action with the maximum priority.

It was then decided to set up within the Department of Scientific and Industrial Research a special division to direct the work, and Imperial Chemical Industries, Limited, agreed to release Mr. W. A. Akers to take charge of this Directorate, which we called, for purposes of secrecy, the Directorate of "Tube Alloys". After Sir John Anderson had ceased to be Lord President and became Chancellor of the Exchequer, I asked him to continue to supervise this work, for which he has special qualifications. To advise him, there was set up under his chairmanship a Consultative Council composed of the President of the Royal Society, the Chairman of the Scientific Advisory Committee of the Cabinet, the Secretary of the Department of Scientific and Industrial Research and Lord Cherwell. The Minister of Aircraft Production, at that time Lord Brabazon, also served on this Committee. Under the Chairmanship of Mr. Akers there was also a Technical Committee on which sat the scientists who were directing the different sections of the work, and some others. This Committee was originally composed of Sir James Chadwick, Professor Peierls, and Drs. Halban, Simon and Slade. Later it was joined by Sir Charles Darwin and Professors Cockcroft, Oliphant and Feather. Full use was also made of University and industrial laboratories.

On October 11th , 1941, President Roosevelt sent me a letter suggesting that any extended efforts on this important matter might usefully be co-ordinated or even jointly conducted. Accordingly all British and American efforts were joined and a number of British scientists concerned proceeded to the United States. Apart from these contacts, complete secrecy guarded all these activities and no single person was informed whose work was not indispensable to progress.

By the summer of 1942 this expanded programme of research had confirmed with surer and broader foundations the promising forecasts which had been made a year earlier, and the time bad come when a decision must be made whether or not to proceed with the construction of large-scale production plants. Meanwhile, it had become apparent from the preliminary experiments that these plants would have to be on something like the vast scale described in the American statements which have been published to-day.

Great Britain at this period was fully extended in war production and we could not afford such grave interference with the current munitions programmes on which our warlike operations depended. Moreover, Great Britain was within easy range of German bombers, and the risk of raiders from the sea or air could not be ignored. The United States, however, where parallel or similar progress had been made, was free from these dangers. The decision was therefore taken to build the full-scale production plants in America.

In the United States the erection of the immense plants was placed under the responsibility of Mr. Stimson, United States Secretary of War, and the American Army administration, whose wonderful work and marvellous secrecy cannot be sufficiently admired. The main practical effort and virtually the whole of its prodigious cost now fell upon the United States authorities, who were assisted by a number of British scientists. The relationship of the British and American contributions was regulated by discussion between the late President Roosevelt and myself, and a Combined Policy Committee was set up.

The Canadian Government, whose contribution was most valuable, provided both indispensable raw material for the project as a whole and also necessary facilities for the work on one section of the project which has been carried out in Canada by the three Governments in partnership.

The smoothness with which the arrangements for cooperation which were made in 1943 have been carried into effect is a happy augury for our future relations and reflects great credit on all concerned — on the members of the Combined Policy Committee which we set up; on the enthusiasm with which our scientists and technicians gave of their best — particularly Sir James Chadwick, who gave up his work at Liverpool to serve as technical adviser to the United Kingdom members of the Policy Committee and spared no effort; and not least, on the generous spirit with which the whole United States organisation welcomed our men and made it possible for them to make their contribution.

By God's mercy British and American science outpaced all German efforts. These were on a considerable scale, but far behind. The possession of these powers by the Germans at any time might have altered the result of the war, and profound anxiety was felt by those who were informed. Every effort was made by our intelligence service and by the Air Force to locate in Germany anything resembling the plants which were being created in the United States. In the winter of 1942-1943 most gallant attacks were made in Norway on two occasions by small parties of volunteers from the British Commandoes and Norwegian forces, at very heavy loss of life, upon stores of what is called "heavy water", an element in one of the possible processes. The second of these two attacks was completely successful.

The whole burden of execution including the setting-up of the plants, and many technical processes connected therewith in the practical sphere, constitutes one of the greatest triumphs of American — or indeed human — genius of which there is record.

Moreover, the decision to make these enormous expenditures upon a project which, however hopefully established by American and British research, remained nevertheless a heartshaking risk, stands to the everlasting honour of President Roosevelt and his advisers.

It is now for Japan to realise in the glare of the first atomic bomb which has smitten her, what the consequences will be of an indefinite continuance of this terrible means of maintaining a rule of law in the world.

This revelation of the secrets of nature, long mercifully withheld from man, should arouse the most solemn reflections in the mind and conscience of every human being capable of comprehension. We must indeed pray that these awful agencies will be made to conduce to peace among the nations, and that instead of wreaking measureless havoc upon the entire globe they may become a perennial fountain of world prosperity.

An interesting article about the British Mission to the Manhattan Project is preserved in the archives of the Los Alamos National Laboratory (link is to an Adobe Acrobat document in .PDF format).

Today was a day for sober remembrance, prayers for the dead, and even more prayers that we may be spared any repetition!

Warren Kozak had a thoughtful piece in the Wall Street Journal yesterday.

Here is the link, but you need a subscription to read the whole thing:

One point I find ironic is that a great many of the key scientists who participated in the Manhattan Project were Europeans fleeing the advance of Nazi influence, including Einstein, Leo Szilard, Edward Teller, and Enrico Fermi.

When taking over the world, never piss off your scientists...