A report from Germany suggests that an early piano once played by Mozart may have been identified.

The instrument dates back to Mozart’s time in 1775, and is at the workshop of a piano master builder in the Baden-Württemberg city, broadcaster SWR reported from Karlsruhe.

The piano maker, Martin Becker, had bought the fortepiano from a Strasbourg antiques dealer in the mid-1980s, but recently decided to auction it online ... after it had sat some 25 years in storage.

But shortly after the object was put up for bids at an online auction house, well-known musical historian Andreas Beuermann got in touch to say he’d believed it had been played by Mozart during performances in Strasbourg. 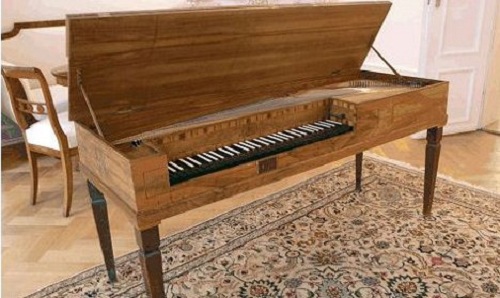 He had recognised it from a historic oil painting in Vienna, which had also shown Austrian composer Joseph Haydn at its keys, SWR reported.

The fortepiano, built by Christian Baumann in Zweibrücken, is one of eight known copies.

According to SWR, Christie’s auction house has confirmed the origin of the instrument, and experts are now researching its history.

Should they determine that the influential composer did play the instrument, then it would be worth several million euros, SWR said.

I particularly liked a comment posted at the article: "If the story turns out to be true, this mans ship has sailed into the Harbour." You can say that again! If it can be proved that Mozart and Haydn actually played this instrument, I honestly don't know how its value will be established. It'll be almost priceless!