Ever heard of 'black rice'?


I hadn't, until I read a news report in the Daily Mail.

The cereal is low in sugar but packed with healthy fibre and plant compounds that combat heart disease and cancer, say experts.

Anthocyanins provide the dark colours of many fruits and vegetables, such as blueberries and red peppers. They are what makes black rice 'black'. 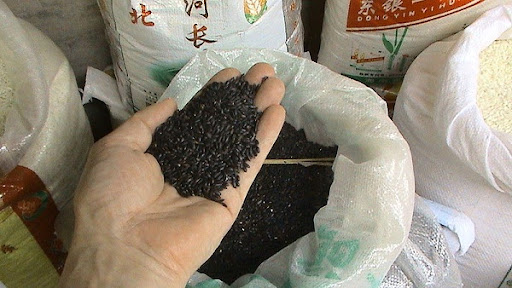 Research suggests that the dark plant antioxidants, which mop up harmful molecules, can help protect arteries and prevent the DNA damage that leads to cancer.

'If berries are used to boost health, why not black rice and black rice bran? Especially, black rice bran would be a unique and economical material to increase consumption of health-promoting antioxidants.'

When rice is processed, millers remove the outer layers of the grains to produce brown rice or more refined white rice - the kind most widely consumed in the West.

Brown rice is said to be more nutritious because it has higher levels of healthy vitamin E compounds and antioxidants.

But according to Dr Xu's team, varieties of rice that are black or purple in colour are healthier still.

They added that black rice could also be used to provide healthier, natural colourants. Studies linked some artificial colourants to cancer and behavioural problems in children.

The scientists presented their findings today at the 240th National Meeting of the American Chemical Society in Boston.

I was intrigued by the report, particularly because I'd never heard of the stuff. A little searching found an article about it in Detroit's Metro Times, which stated:

So deeply purple the grains appear to be and are called black, this rice originated in China, has a nutty taste and aroma, is high in nutrients and gets its name from a legend that it was only grown for and consumed by Chinese emperors. There were rumors that these guys also fed it to their concubines because of its allegedly powerful aphrodisiac qualities.

Hmm. I don't know about aphrodisiac qualities . . . those have been claimed for almost everything under the sun at one time or another; and rhinoceros horn (for which wildly extravagant claims have been made in that department) at least looks the part, unlike black rice! Still, it's interesting to discover a food new to me. I'll have to look for some of this stuff, and try cooking with it.

It cooks up purple, really, and kinda sweet more than nutty. Good for an odd-looking rice pudding, not so great for a substitute for regular rice, unless you're doing a dish that can take sweetness in it.

It sounds a bit like the "wild rice" from Minnesota and Wisconsin (and Canada), except for the sweet flavor. I'd like to try some, perhaps under a tart curry to balance the sweetness.
LittleRed1

It doesn't taste like wild rice at all. I love cooking with the stuff.

I should not have read this post and thread before lunch.

I think it's best mixed 50/50 with normal white or brown rice.