The publishers of the Oxford English Dictionary (OED) have announced that no new edition of the full dictionary will be published on paper.

It was first published 126 years ago and is respected the world over. 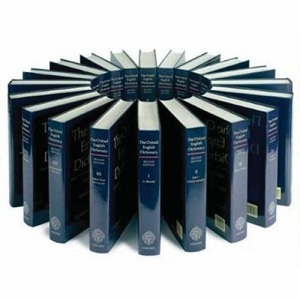 But the Oxford English Dictionary will never appear in print again, its owners have announced.

Instead, the 80 lexicographers who have been working on the third edition for the past 21 years have been told the fruits of their labour will exist solely online.

The OED has been available on the internet for the past ten years and receives two million hits a month from subscribers who pay £205 a year, plus VAT, to access it. [In the USA, individual subscribers pay $29.95 per month or $295 on an annual basis.]

Oxford University Press says the dominance of the internet means the latest update to the definitive record of the English language - currently 28 per cent complete - will never be published in print.

'The print dictionary market is just disappearing - it is falling away by tens of per cent a year,' said Nigel Portwood, 44, chief executive of OUP.

'Our primary purpose - and this takes a bit of adjusting to - is not profit, it is the dissemination of knowledge,' he said.

'Print is still pretty important round here but, wherever possible, if there is an opportunity, we are moving out of it.'

The printed dictionary has a shelf life of another 30 years, he predicts.

The third edition is only expected to be completed by 2037.

The existing Second Edition of the OED will still be available in a 20-volume printed version (US price $995.00) for the foreseeable future. It's already available online, where it's updated quarterly. I find its Word Of The Day (for which you can sign up via e-mail) to be a fascinating resource, often turning up words I'd never heard of before. I think that US 'fair use' copyright law will allow me to quote the definition of one word out of the over half-a-million defined in the full OED, so here's today's word, Tod:

I. 1. A weight used in the wool trade, usually 28 pounds or 2 stone, but varying locally.

b. A load, either generally, or of a definite weight.

fig. 1648 HERRICK Hesper., Conjuration to Electra, By those soft tods of wooll [clouds] With which the aire is full.

Meat and drink for bibliophiles!

Online resources have many shortcomings compared to print editions. For instance, type in 'hats' in the OED's search box and it tells you there's no such word; type in 'cats' and you're taken directly to the 'catmint' page (because cats-mint is an alternative spelling). More reasons why I won't be throwing away my collection of traditional dictionaries here: http://virtuallinguist.typepad.com/the_virtual_linguist/2010/08/oed-online.html#tp

Typical solution reached by bean counters whose work typically has zero relationship to the real world other than in terms of how cheapy can we produce our product.