Feel-good story of the day


I'm a sucker for feel-good stories, particularly when they happen to older folks who might be struggling with physical ailments, poverty, and the like. When one of them strikes it lucky and becomes a success, it's always a heart-warming thing for me - like the lady in this report from the Daily Mail.

When Christine Munroe revived her grandmother’s jam-making recipes, she simply hoped the results would prove popular with family and friends.

They turned out to be much more than that.

The recipes have been such a runaway success they have turned the 72-year-old into an accidental entrepreneur inundated with requests for her creations – including chilli jam and orange and malt whisky marmalade. 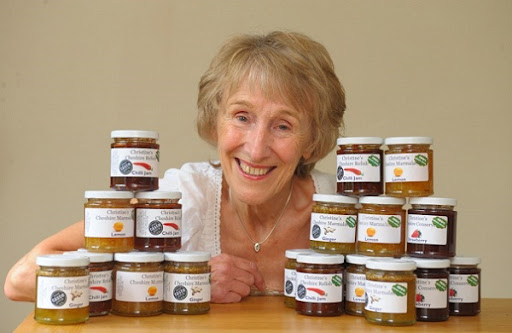 Based on 100-year-old recipes handed down from her mother and grandmother, her range of jams, marmalades, pickles, relishes and mustards have won a string of awards from the Guild of Fine Food and are being sold by the National Trust.

They are so popular that Mrs Munroe, a retired personal assistant, now spends 15 hours a day making 200 jars of condiments for her business.

Last night she said she owed her success to her mother, Dorothy, and grandmother, Ellen, who taught her how to make jam as a young girl.

‘I’m absolutely delighted these jams are a big hit, but I’m only using the old recipes my mother and grandmother used all those years ago,’ she said.

But it wasn’t until last year, when she was asked to make a batch of orange marmalade for a local farmer’s market, that her jam came to the attention of food lovers nationwide.

The 17 jars sold so fast, and she was inundated with so many requests for more, that she decided to set up Christine’s Cheshire Preserves, in February 2009.

Now her son, Hugh, 40, has given up his job as a maths teacher to help his mother run the business.

‘You don’t really have a day off. At the weekend it’s the farmer’s markets and during the week it’s the jam - making it and delivering it, but it’s good fun,’ Mrs Munroe added.

‘I would just be bored stiff putting my feet up. I love it and just enjoy meeting different people.'

It's nice when good things happen to good people, isn't it? I see from her Web site that mail order is available, although I don't know whether the company will ship to the USA. If they do, I must get a jar of her orange marmalade with malt whisky. I've had one jar like that in my lifetime, and it was gooooood. I want another!

Here's to late bloomers, too!

Not to worry; I'm sure the National Trust will decide that this is too important for her to do by herself and will declare her receipes a National Heiritage. Then they will take over the whole business.