Along with many others, I was seriously concerned when the Transportation Safety Administration announced some time ago that they planned to introduce full-body scanners at airports. I didn't believe their assurances that the images would never be retained, stored, or disseminated. Throughout the history of governments all over the world, once they have something, they hang on to it - they don't let go. It's a disease that goes with the bureaucracy.

Well, today came a news report telling us that our concerns were fully justified.

Now it turns out that some police agencies are storing the controversial images after all. The U.S. Marshals Service admitted this week that it had surreptitiously saved tens of thousands of images recorded with a millimeter wave system at the security checkpoint of a single Florida courthouse.

This follows an earlier disclosure (PDF) by the TSA that it requires all airport body scanners it purchases to be able to store and transmit images for "testing, training, and evaluation purposes." 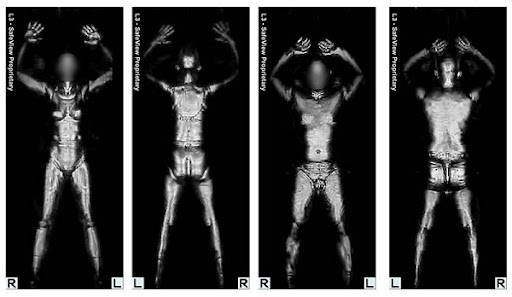 This privacy debate, which has been simmering since the days of the Bush administration, came to a boil two weeks ago when Homeland Security Secretary Janet Napolitano announced that scanners would soon appear at virtually every major airport. The updated list includes airports in New York City, Dallas, Washington, Miami, San Francisco, Seattle, and Philadelphia.

The Electronic Privacy Information Center, a Washington, D.C.-based advocacy group, has filed a lawsuit asking a federal judge to grant an immediate injunction pulling the plug on TSA's body scanning program. In a separate lawsuit, EPIC obtained a letter (PDF) from the Marshals Service, part of the Justice Department, and released it on Tuesday afternoon.

These "devices are designed and deployed in a way that allows the images to be routinely stored and recorded, which is exactly what the Marshals Service is doing," EPIC executive director Marc Rotenberg told CNET. "We think it's significant."

William Bordley, an associate general counsel with the Marshals Service, acknowledged in the letter that "approximately 35,314 images...have been stored on the Brijot Gen2 machine" used in the Orlando, Fla. federal courthouse. In addition, Bordley wrote, a Millivision machine was tested in the Washington, D.C. federal courthouse but it was sent back to the manufacturer, which now apparently possesses the image database.

This trickle of disclosures about the true capabilities of body scanners--and how they're being used in practice--is probably what alarms privacy advocates more than anything else.

The late President Reagan put it very well: "Government is like a baby. An alimentary canal with a big appetite at one end and no sense of responsibility at the other." If we allow them to get their hands on something - anything! - they'll hang on to it, and use it in ways we cannot possibly foresee or imagine. Laws passed for one purpose are applied in ways and to cases never intended by their authors. Personal information collected for a particular purpose winds up being spread all over many other departments and 'mined' in ways never intended by its original collectors. And now, pictures of travelers may end up being stored for undisclosed purposes - even sent back to the machine's manufacturers! Heaven only knows what some technician there will do with a data dump of thousands of pictures of virtually-naked people!

One can only hope that EPIC succeeds in their lawsuit . . . otherwise, where will this nonsense stop?

These things bother me a great deal- I think I ought to be allowed to decide who does, or does not, see me sans clothing, and firmly in the does not category are people I have never met, including "airport security"- excuse me, but what degree, training, or skill set do you have that should make me comfortable with that? good grief, I pick same-gender doctors for my prudish comfort level, and they have significantly more justification for wanting to examine a body.

also, yeah right that those workers are staying strictly professional. What do you want to bet their are a disproportionate number of young people picked to be scanned- those that the airport workers find attractive? kind of like how officially they can't profile- but those with an arabic name are more likely to get "randomly selected" for additional scanning?

and now to add (as predicted) that the images can be stored so God only knows how many other people could view those images...

it's making me debate if I ever need to fly anywhere again, and if I didn't have family living literally across the country that I would like to see on occasion...

I'm wondering when we will first see the photo of a celebrity or political figure released? When will some newspaper on a character assassination bent publish the photo of someone?