For those fascinated (as I am) by space and its mysteries, the Hubble telescope has just produced the first photographs of the effects of so-called 'dark energy'. A news release states:

For the first time, astronomers using NASA's Hubble Space Telescope were able to take advantage of a giant magnifying lens in space — a massive cluster of galaxies — to narrow in on the nature of dark energy. Their calculations, when combined with data from other methods, significantly increase the accuracy of dark energy measurements. This may eventually lead to an explanation of what the elusive phenomenon really is.

"We have to tackle the dark energy problem from all sides," said Eric Jullo, an astronomer at NASA's Jet Propulsion Laboratory, Pasadena, Calif. "It's important to have several methods, and now we've got a new, very powerful one." Jullo is lead author of a paper on the findings appearing in the Aug. 20 issue of the journal Science.

Scientists aren't clear about what dark energy is, but they do know that it makes up a large chunk of our universe, about 72 percent. Another chunk, about 24 percent, is thought to be dark matter, also mysterious in nature but easier to study than dark energy because of its gravitational influence on matter that we can see. The rest of the universe, a mere 4 percent, is the stuff that makes up people, planets, stars, and everything made up of atoms. 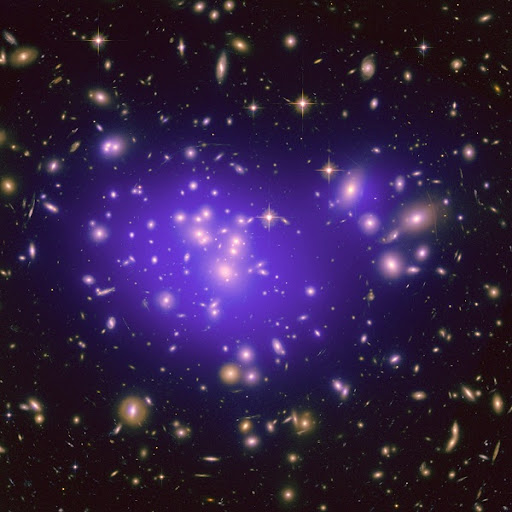 Dark matter in the cluster is mapped by plotting the plethora of arcs
produced by the light from background galaxies that is warped by the
foreground cluster's gravitational field. Dark matter cannot be
photographed, but its distribution is shown in the blue overlay.
The dark matter concentration and distribution is then used to better
understand the nature of dark energy, a pressure that is accelerating
the expansion of the universe.

In their new study, the science team used images from Hubble to examine a massive cluster of galaxies, named Abell 1689, which acts as a magnifying, or gravitational, lens. The gravity of the cluster causes galaxies behind it to be imaged multiple times into distorted shapes, sort of like a fun-house mirror reflection that warps your face.

Using these distorted images, the scientists were able to figure out how light from the more distant, background galaxies had been bent by the cluster — a characteristic that depends on the nature of dark energy. Their method also depends on precise ground-based measurements of the distance and speed at which the background galaxies are traveling away from us. The team used these data to quantify the strength of the dark energy that is causing our universe to accelerate.

"What I like about our new method is that it's very visual," said Jullo, "You can literally see gravitation and dark energy bend the images of the background galaxies into arcs."

That's pretty amazing! We're looking at a galaxy cluster over two billion light years away from Earth, so far away that no matter how good we may get at galactic exploration, it's unlikely the human race will ever reach it; yet even so, it's helping to reveal secrets of how our universe works. Mind-boggling, isn't it?