I was very happy to read of the adventures of the Crafton family, who over the past seven years have sailed around the world. The Washington Post has an excellent article about the experiences of the two adults and three children. Here's an extract to whet your appetite.

After achieving two-career success in Anchorage (Kathy as an ICU nurse, Tom as a family psychologist), the couple found that big-house status and plenty of everything left them feeling not much of anything, save frustration and want. With both Jena and Ben having significant developmental and speech delays, what the parents really craved was less stuff and more time together.

"We looked at each other and said, 'What the hell are we doing?' " Tom says.

It took six months to liquidate everything. By 2001, they had sold two houses in Alaska and their share of a family property in Severna Park, where Tom grew up. With the proceeds, they bought the sturdiest ocean crosser they could find, a Taiwanese-built Hans Christian with twin yellow masts, and set forth. 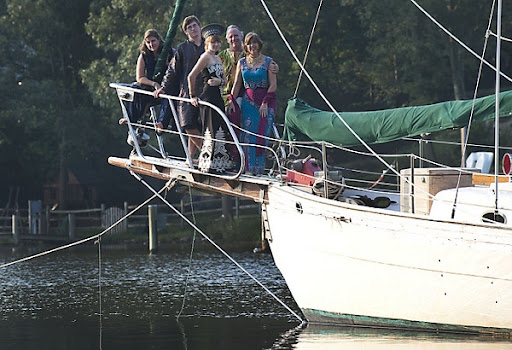 It was an adjustment, of course. There were head bumps in the tiny sleeping berths and five hurricanes during the year and a half they spent prepping in Florida. But almost at once, an instinctive choreography emerged, allowing five people to colonize a space not much larger than a minivan.

The close quarters stayed remarkably clear of clutter. They even got rid of the small refrigerator, not wanting to run the smelly engine just to keep beer cool. At sea, they lived on fish and canned goods. Ashore, they delighted in taking jitney buses to the market each day, living a local's life.

They wandered the Americas for a couple of years, finally crossing the Panama Canal in 2006. This was pure blue-water cruising, sailing for miles and for months between Pacific Islands. Vanuatu, where the people owned the least and smiled the most, was one of their favorites. They stayed three months.

"They are the happiest people in the world," Tom says. "It reinforced everything we believed about putting time with the family over this blind pursuit of material things."

There was a break, 18 months in a New Zealand harbor. They would have settled there permanently but for bureaucratic hassles and the cost of living. To buy a house would have meant selling the boat, and that wasn't an option. "She's like a member of our family now," Kathy says.

And so they sailed, ever westward. Even now, they make a point of gathering to watch the sunset together, and of getting up early to see it rise.

In many places, they traded for fresh food from the canoes that surrounded them when they dropped the hook in an island harbor. Bunches of bananas and mountains of fish could be had for an empty plastic bottle, coveted for storage in places where everything is biodegradable.

But it wasn't all mangoes and papayas. Their Pacific diet also included betel nuts, kava (a ceremonial hallucinogen), fish intestines and, at separate events, dog and bat. Last spring, during the final 43-day crossing from Ascension Island to Charleston, S.C., they lived almost entirely on canned tuna. "Ascension is the worst place to provision," says Tom. "It's like a desert with volcanoes."

They spent hours in that first grocery store in Charleston. "Oh my God, Pop-Tarts!" Kalena, who goes by Kali, remembers exclaiming.

There's more at the link, along with more photographs from their voyage. Highly recommended reading.

It's great to read of a family willing to abandon the rat race and set out together in search of adventure. I bet their kids will never forget growing up in that almost unique environment! I think they're going to turn into rather special adults, strong, independent and standing tall on their own two feet. An adventurous life tends to do that to a person.

Its a great thing. Wonderful for the kids, a little self centered on the parents part but above all a blessing for all.

A sort of unattainable daydream for the rest of us. And well so.

The best part, the education of the kids will be tons better than public schooling.