Today's title goes to the unknown Chinese official who either took, or OK'ed the release of, a video clip showing what appears to be an actual Chinese-government-sponsored hacking attack on a Western Internet site. Ares reports:

A clip from a Chinese TV documentary purporting to show a Chinese military-launched cyberattack on a U.S.-based religious sect is attracting the attention of U.S. intelligence and defense industry officials and has made it onto YouTube. 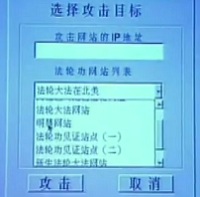 A veteran National Security Agency cyber-warrior who viewed the clip classifies it as “very cool,” and says it could become an embarrassment to the Chinese government. In addition to YouTube, the footage, as of Aug. 23, could still be viewed on China’s CCTV website.

The Chinese school involved in the film clip purports to be the Electrical Engineering University of China’s People’s Liberation Army [PLA], and the reporters contend that the clip offers “direct evidence that the PLA is involved in coding cyberattack software directed against a Chinese dissident group.

“The software window says 'Choose Attack Target',” the reporters translate from the video. “The computer operator selects an IP address from a list — it happens to be 138.26.72.17 — and then selects a target. Encoded in the software are the words 'Falun Gong website list', A drop-down list of dozens of Falun Gong websites appears. The computer operator chooses Minghui.org, the main website of the Falun Gong spiritual practice. The IP address (138.26.72.17) belongs to the University of Alabama in Birmingham, according to an online trace. The documentary then show a big 'Attack' button on the bottom left being pushed, before the camera cuts away.”

There's more at the link. The video clip in question may be viewed on YouTube (or, at least, it hadn't been taken down as at the time of writing). The section described in the last paragraph above, and shown in the screen capture above, begins 36 seconds into the clip. (Of course, the narration and the screenshots are all in Chinese.)

I wouldn't like to be in the shoes of the person who took and/or released that video clip. I don't think the Chinese government is likely to be sympathetic to his excuses!

But he'll have to collect his prize while in the Big House.

So, its the Chinese ripoff of the Low Orbit Ion Cannon (LOIC) that Anonymous uses?