About the Hostess Brands bankruptcy . . .


. . . did you see the salaries the union bosses involved are paying themselves?

The Bakery, Confectionery, Tobacco Workers and Grain Millers' International Union has a membership of just over 82,000, according to Union Facts.  Here's what its President and Vice-Presidents pay themselves, from the same Web site: 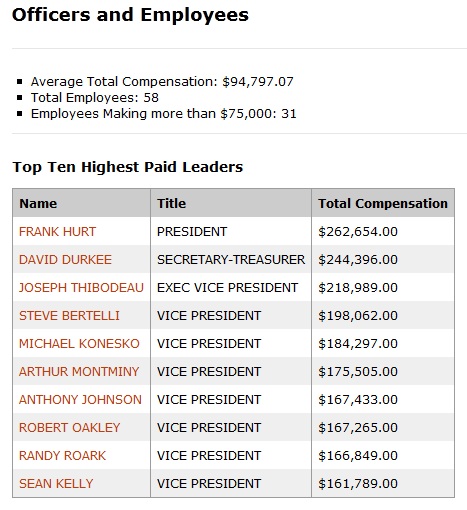 For the life of me, I can't see how a trade union - any trade union - can justify paying such bloated-plutocrat salaries to its officers.  Here's a simple question:  what do those salaries say about those earning them off the sweat of their members?  Do such figures really indicate that the President and Vice-Presidents of the union give a flying Twinkie about the welfare of those whose contributions support them?  Or do they care only about milking the cow to death?

If I were one of the thousands of Hostess Brands employees who have lost their jobs when the company shut down, thanks to the union's actions, I'd want to know what my union bosses had been doing to earn that sort of money . . . particularly because, thanks to them, I'd no longer be earning a cent from the company!  My pension has vanished into the bureaucratic limbo of the Pension Benefit Guaranty Corporation, and my as-yet-unpaid expense claims and medical bills are unlikely to be honored as part of the Hostess Brands bankruptcy.  However, my union Presidents and Vice-Presidents will go right on drawing their fat-cat salaries, and won't suffer so much as a moment's hardship.

Was Hostess backing down and not going out of business? How much pressure is being applied? And by whom?