Having got the former Soviet aircraft-carrier Varyag into operational condition, and renamed it Liaoning, the People's Liberation Army Navy (PLAN) has made the first landings and take-offs from her deck. 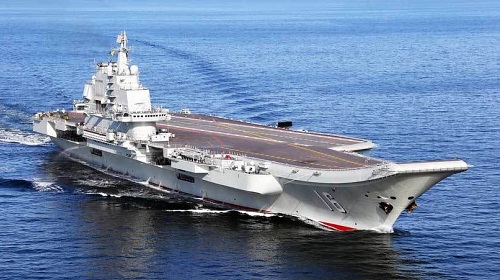 The aircraft involved were unlicensed (that's to say, reverse-engineered - i.e. stolen) derivatives of the Soviet Sukhoi Su-33, known locally as the Shenyang J-15.  In the photograph below, note the puffs of smoke from the tires hitting the deck, and the V shape (on the deck) of the arrestor cable that's been picked up by the tail-hook at the rear of the aircraft, and is running out as it slows it to a standstill. 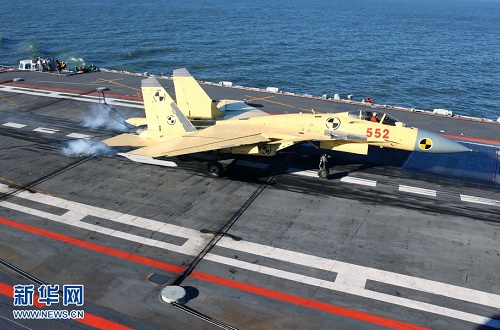 Being a STOBAR design and lacking catapults, the Liaoning isn't capable of launching heavy (or heavily-laden) aircraft, as there is no external assistance available to the aircraft - they must rely on their own engine(s) for all take-off power, plus the brief upward boost derived from the carrier's ski-jump bow. 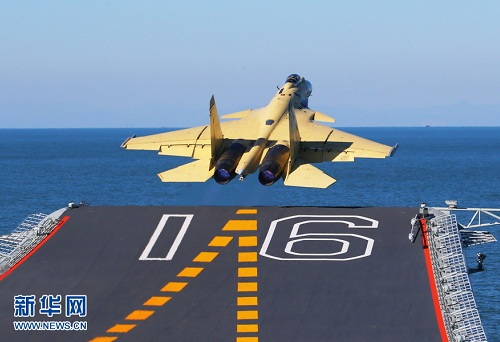 Despite that limitation, this is an important increment on the naval aviation learning curve for the PLAN.  I'm sure the service is planning for CATOBAR carriers (like those of the US Navy) in the not too distant future, plus aircraft that can take advantage of them.

Here's video footage of the first landings and takeoffs.

Unlike some observers of naval technology and the maritime balance of power, I'm not unduly alarmed by China developing its naval aviation in this way.  After all, it's got every right to do so!  It may use it to 'flex its maritime muscles', yes;  but that's exactly what Western powers have done to China for decades - generations! - so I'm afraid that 'turn about is fair play'.  We should expect more such developments from China in the short to medium term.  We'll just have to learn to live with it, as we did with earlier maritime developments in the Soviet Union and other rivals.

(There are more [and larger] photographs of Liaoning's first landings and takeoffs here.)

It took the Chinese 14 years to put that unfinished Soviet carrier in service. They made the Kirov a floating hotel, guess they didn't like the shape she was in. China has announced plans to build their own aircraft carriers, but say the soonest one will be launched will be 2020.

The Chinese are learning carrier ops the hard way, but with eight years to do so they should have basics down by the time their own ship(s) are ready.

Kudos to the Chinese for doing the most dangerous thing involving airplanes in the world successfully.


lol good luck china. oh and good luck the rest of the world to. ;P~