It still comes down to the man, rather than the machine


I'm all in favor of using technology to prevent harm to our fighting men.  If a machine can do a dangerous job without risking a soldier or sailor or airman, let's use it.  If technology can avoid the necessity of exposing one of our service personnel to hostile fire, it should be done.  However, when push comes to shove, there are times when all the technology in the world can't take the place of a man who's motivated, trained and willing to fight like the devil.

Such a man, clearly, is U.S. Marine Sergeant Cliff Wooldridge, who's been awarded the Navy Cross for his exploits in Afghanistan.  USA Today reports:

Wooldridge's exploits are not well known outside the Marine Corps, but officers say close encounters with the enemy are not uncommon, despite the increasing use of drone-fired missiles and smart bombs.

Wooldridge bounded across a freshly harvested field toward the firing as a couple of his fellow Marines got down and fired at targets ahead of him. Wooldridge burst into the treeline and saw a militant emerge from a ditch and start to run.

"I shot and saw him fall," Wooldridge says. 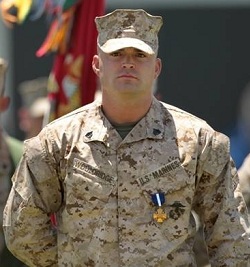 Wooldridge's two teammates caught up with him. They moved quickly through the trees and stopped short when they came to the edge of a farming village with mud homes and walls. Looking down from a small hill, they saw 15 armed insurgents at the center of the village.

The startled insurgents saw the Marines and turned and raised their weapons. It was too late. The Americans opened fire. Most fell, but a handful escaped.

Marines watched as an insurgent carrying a rocket-propelled grenade emerged from a narrow alleyway in the village and stepped over the bodies of his fallen comrades. The Marines shot him.

This is what the Marines had been hoping for. They had flushed out the enemy and forced the Taliban into a close-quarters fight.

Wooldridge moved his team to another spot for a different view on the Taliban compound.

Just then he heard voices that sounded like men arguing behind a nearby wall. He peeked around the corner and was face to face with four insurgents armed with machine guns, assault rifles and rocket-propelled grenades.

Wooldridge shot two of them before they could react. He killed a third as the man was trying to escape. Out of ammunition, he tried to bluff the last insurgent by gesturing at him to drop his weapon.

The insurgent raised his gun and pointing it at Wooldridge, who was 10 feet away. Wooldridge ducked behind the mud wall to reload. Before he could put a fresh drum in his light machine gun, a barrel poked around the corner of the wall.

Wooldridge dropped his own weapon and grabbed the barrel of the machine gun. He slammed the insurgent against a wall and both men fell to the ground. Wooldridge rolled on top of the insurgent and began pummeling him.

The insurgent reached for a grenade attached to the Marine's protective vest. If he pulled the pin, both men would die.

Wooldridge broke away and got to his feet, grabbing the insurgent's machine gun at the same time. He aimed it at the insurgent and squeezed the trigger. It didn't work.

With the stock of the weapon, he beat the Taliban fighter to death.

Marines arrived to find Wooldridge covered in blood, leaning over the dead insurgent.

The Marines captured other weapons and radios, from which their interpreters began monitoring the Taliban's radio traffic. Madden says the Taliban appeared "terrified" by what happened.

"It absolutely crushed their morale," Madden says. "They had no idea what happened to them."


There's much more at the link.  Eminently readable.

Sergeant, if we ever find ourselves in or near the same bar, the beers are on me.  A heartfelt "Ooo-rah!" to you from this combat veteran.

Beat the taliban dude to death with his own machine gun. Good-freaking-Lord.

No wonder the taliban scumbags are freaked.

Honored as the USO Marine of the Year on 11/2/12. For honorees of each of the services see http://www.uso.org/gala/.

Amen! THIS is the definition of taking the fight TO the enemy!!!

I can hear the Liberal whinners now: "That Marine beat a defenseless man to death. Couldn't the Marine have just had a friendly discourse with him and captured him?"

Ooo-rah! indeed. I too offer the Sergeant the tasty beverage of his choice.

I don't drink anymore. A hearty smootch will have to do. You guys go ahead and drink. Up close and personal is really nice. :)

Under "Bravery" in the dictionary, see Sgt. Wooldbridge.

"In brutal hand-to-hand combat, Wooldridge grabbed the machine gun of an enemy insurgent and beat him to death with it."