"There's none so blind as those who will not see"


That time-honored idiom applies particularly to the world's economic situation right now.  I'm at a loss to understand how so many (including alleged 'experts' like Paul Krugman and other Keynesian hard-liners) continue to parrot the 'party line' that we need to borrow more, tax more and spend more in order to stimulate the economy and overcome the recession.  We've been doing precisely that for a long, long time . . . and the results are what confront us now.

The "Money Fairy", that is, deficit spending and/or monetary games such as QE are exactly identical to a tax on the economy.

Again (and I'm going to keep pounding this into people's heads until I start hearing it on CNBS!) if you have 10,000 units of output (e.g. oranges, gallons of gasoline, cars, etc) and there are 10,000 units of currency and credit in total available in the economy to be used, the exchange rate is 1:1.

Now press a computer button (as The Fed and Federal Government do) and increase the number of units of credit and currency (by "borrowing and QEing") in the system by 100% to 20,000.

If [you] happen to have 100 of those units of currency in your home you can now only buy half as many units of output as you could have before.  In the best case, where the government evenly distributes that "created" money through the economy, you're in the same place you were before.  But you never see the "best case"; someone always get privilege, they get more of it than you do, and thus you see a real, tangible loss of ability to buy things.

This is an act of pure redistribution, exactly as if you were taxed.

Were the IRS to instead show up at your door with a gun, shove it up your nose, and demand 50% of every dollar you have in the house, the effect on your ability to buy gallons of gasoline would be very close to identical.

Whether you raise taxes or spend in deficit doesn't matter ... because both do the same thing.  The fact of the matter is that since 2000 we have been running a monstrous game on the American consumer and investor -- the government "discovered" that it can produce what appears to be a healthy economy without actually doing so!  Much of this came from the fact that through the 1980s and 1990s, even during the Internet's "coming of age", the economy really wasn't all that good and real personal income in purchasing-power adjusted terms wasn't particularly healthy. 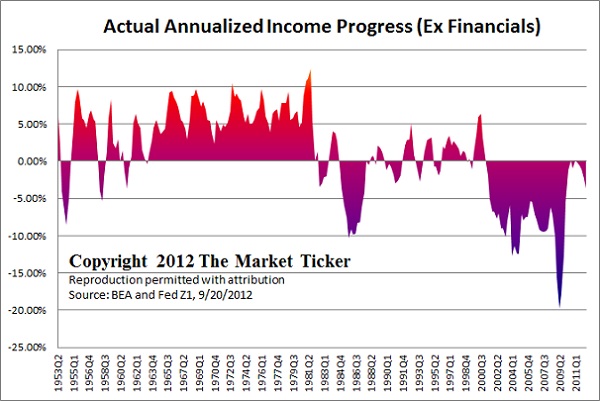 Note the very right side of that chart and the deterioration over the last few quarters.  It's getting worse folks, not better, despite what Barack Obama and the crooners on the Tee Vee are telling you.

Look, I'm not making these numbers up.  I'm not blowing smoke up your tail.  All this data is published by our own government; it's right there in your face.  I'm not doing what some people are, and "re-basing" it (e.g. Shadowstats) or claiming to have some proprietary model that nobody else has and therefore I'm "smarter than everyone else."

I'm simply opening my eyes and using the very information that our government's official sources present, and which they claim shows that things are getting better.

They're lying and their own data proves it.

We have become addicted to a "false God" siren song -- that government redistribution and degradation of the economy through intentional destruction of purchasing power is somehow "positive" for the economy.

There is no solution to the Fiscal Cliff until ... the debt we have accumulated at the Federal Level is paid down.

Until that happens we are simply trying to cheat math and all attempts to do so will further destroy purchasing power and thus hurt the economy and personal economic outcomes in aggregate for Americans.  The simple fact is that arithmetic is not a political process and always produces the same answer no matter how fervently you wish it would not or how often you choose to lie to yourself.

All this borrowing and spending are, of course, the only things that have enabled our 'entitlement society' to go on - yet they can't possibly continue to do so.  The chief economist of Wells Fargo pointed out last year:

"(We've had) forty years of political promises to give people certain entitlements, certain benefits. And we've now come to understand that the United States is in a very difficult position than it was in the early post-World War II period. We're not the dominant economy. And our pace of growth has moderated. Our ability to finance this is all limited."


Unfortunately, our politicians (of both major parties) resolutely refuse to confront this reality . . . and so do most of those who elect them.  That's why last week's elections had the outcome they did.  Americans don't want to hear the truth - it's too uncomfortable - so they continue to elect politicians and parties who promise them the biggest benefits, the most 'freebies'.  Nevertheless, reality - mathematical inevitability - will, sooner or later (probably the former), catch up with us . . . and when it does, the disintegration of our society is by no means an impossibility.

Mark Steyn gets it.

If you add up the total debt — state, local, the works — every man, woman, and child in this country owes 200 grand (which is rather more than the average Greek does). Every American family owes about three-quarters of a million bucks ... In 2009, the Democrats became the first government in the history of the planet to establish annual trillion-dollar deficits as a permanent feature of life. Before the end of Obama’s second term, the federal debt alone will hit $20 trillion. That ought to have been the central fact of this election — that Americans are the brokest brokey-broke losers who ever lived, and it’s time to do something about it.

In the course of his first term, Obama increased the federal debt by just shy of $6 trillion and in return grew the economy by $905 billion. So, as Lance Roberts at Street Talk Live pointed out, in order to generate every dollar of economic growth the United States had to borrow about five dollars and 60 cents. There’s no one out there on the planet — whether it’s “the rich” or the Chinese — who can afford to carry on bankrolling that rate of return. According to one CBO analysis, U.S.-government spending is sustainable as long as the rest of the world is prepared to sink 19 percent of its GDP into U.S. Treasury debt. We already know the answer to that: In order to avoid the public humiliation of a failed bond auction, the U.S. Treasury sells 70 percent of the debt it issues to the Federal Reserve — which is to say the left hand of the U.S. government is borrowing money from the right hand of the U.S. government. It’s government as a Nigerian e-mail scam, with Ben Bernanke playing the role of the dictator’s widow with $4 trillion under her bed that she’s willing to wire to Timmy Geithner as soon as he sends her his bank-account details.

If that’s all a bit too technical, here’s the gist: There’s nothing holding the joint up.

Americans as a whole have joined the rest of the Western world in voting themselves a lifestyle they are not willing to earn. The longer any course correction is postponed the more convulsive it will be. Alas, on [November 6th], the electorate opted to defer it for another four years. I doubt they’ll get that long.


Again, more at the link. Read it and weep. 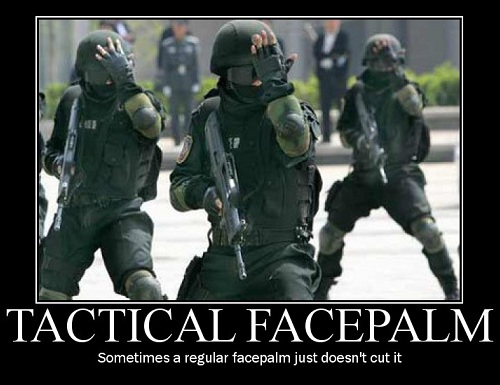 I figured this out as a kid after reading "A Connecticut Yankee in King Arthur's Court." Twain explained in quite clearly in 1889. It shouldn't be a surprise to any literate person.

I know you're not the source, but I seriously question that graph "Actual Annualized Income Progress". It shows incomes actually growing by about 5-10%/yr during the mid-70s, when the country was wracked by inflation from the Arab oil embargo and the abandonment of the gold standard. I'm suspicious of the idea that incomes grew during a bad period in the country.

I need to understand their yardstick a bit more before I'll take their word for it.

But, of course, the economy has "inertia", for lack of a better term.

So the people to whom the extra money is distributed get some additional use out of it, before all the prices rise.

It's just a crony game.

It makes my insistence on "playing by the rules" feel very stupid, at times.