What to expect during President Obama's second term


I've been trying to figure out the way things are likely to go during President Obama's second term.  I've tried to avoid hyperbole, emotion and partisanship, and base my analysis solely upon the facts of his first term, and the economic realities that currently prevail.  For what it's worth, here are my forecasts for the four years until the 2016 Presidential elections.

The US national debt will continue to increase.  When President Obama took office on January 20th, 2009, according to CBS News, it stood at $10.626 trillion.  Today, according to the US Treasury, it stands at $16.214 trillion - an increase of 52.6% in less than four years.  This has only happened because the Federal Reserve has aided and abetted the growth by 'printing money' to buy US Treasury bonds - 61% of all bonds sold during 2011, for example.  As Sovereign Man points out:

It took over 200 years for the US government to accumulate its first trillion dollars in debt. It took just 286 days to accumulate the most recent trillion (from $15 trillion to $16 trillion).

Last month alone, the first full month of Fiscal Year 2013, the US government accumulated nearly $200 billion in new debt– 20% of the way to a fresh trillion in just 31 days.


If this level of debt increase is repeated during President Obama's second term (and frankly I don't see how it can be avoided, given his expansion of the 'welfare state' and the lack of new sources of revenue to tap), the national debt will amount to approximately $25 trillion by the next presidential election.  Even if the growth rate is halved, it'll amount to more than $20 trillion - and I don't think it can be halved.  Given that the annual Gross Domestic Product of the entire world is currently reckoned to be in the $60-$70 trillion range, this will mean that the national debt of the USA alone will amount to approximately one-third of current global economic output . . . which is stark staring madness.  It's not sustainable by any stretch of the imagination.

This increase in national debt will be accompanied by an enormous increase in domestic taxation.  No less than 20 new or increased taxes were enacted as part of Obamacare.  Some have already taken effect, but the largest of them won't do so until next year.  If you think the fact their implementation was delayed until after yesterday's election was purely coincidental, I have this bridge in Brooklyn, NYC I'd like to sell you . . .  Over and above these taxes, President Obama has called for increased taxes on 'the rich' and on corporations (notwithstanding the fact that US companies are already amongst the most heavily taxed anywhere in the world).  I suspect he'll be able to get at least some of them through the Republican-controlled Congress.  That means those of us living in the USA are going to find our take-home pay reduced, even as inflation and other factors eat away at its buying power.

(Many people will suffer a worse reduction in income because of fewer hours of work.  One of the qualifiers in Obamacare is that employees working less than 30 hours per week are considered to be part-time, and don't have to be covered.  In response, many companies employing hourly-paid workers are already looking at ways to reduce their hours, to ensure that as few as possible of their staff work more than 30 hours per week.  That will save them a lot of money . . . but many of their workers will find their income cut by at least 25%.  Welcome to yet another side-effect of socialized health care!)

The overall economic condition of our federal government will continue to worsen - probably drastically.  Look at the economic conditions currently prevailing in those US states that have raised taxes, indulged in massive deficit spending, and expanded welfare programs and the role of the 'nanny state'.  Examples include California, Illinois, New York, Massachusetts, etc.  The State Budget Crisis Task Force considered six such states, and found them to be in a very poor fiscal condition.  The policies long followed in those states were very similar to those implemented by the Obama administration during its first term.  They're likely to be continued and further expanded during its second term - and will probably lead to similar results on a federal level, just as they've already done in the states that have applied them.

Inflation is likely to be a growing problem.  Forget the figures released periodically by the government.  We've discussed before how inaccurate they are - deliberately so, since they leave out of consideration such fundamental categories as fuel and food.  The figures produced by John Williams of Shadowstats are much more accurate, based as they are on far more inclusive measurements.  According to Mr. Williams, the real annual consumer inflation rate is closer to 10% in terms of 1980's measurement standards (which include many components and factors that were later excluded as part of politically-motivated 'improvements' to the statistics, introduced by subsequent administrations).  It's illustrated in the graph below (reproduced courtesy of Shadowstats). 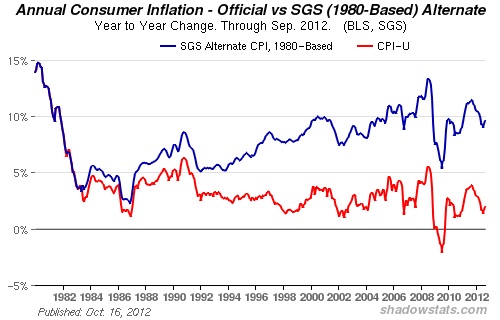 If Mr. Williams' figures are correct (and I believe they are), we can expect consumer prices to increase by a minimum of 25% over the course of President Obama's second term.  I believe they'll go up much more than this, because inflation gains momentum as it increases.  I wouldn't be surprised to see the Consumer Price Index increase by 50% or more during the next four years.  If a global economic collapse occurs, leading to hyperinflation, that expectation may be ridiculously low.

The Fed's ongoing quantitative easing programs are likely to add to inflationary pressures, particularly by leading to further depreciation in the value of the dollar against foreign currencies (which will make imported goods more expensive in dollars).  Its efforts to keep interest rates low are helpful to banks and borrowers, but devastating to savers and those trying to live on interest income.  In particular, retired people find themselves caught between the rock of low interest rates (reducing their income from savings and investments, and reducing their pension providers' ability to increase pensions in line with inflation due to reduced interest income) and the hard place of rising prices (caused by inflation and a declining dollar).  They're going to be in for a very hard time over the next four years . . .

John Bagot Glubb, in his essay 'The Fate Of Empires' (link is to an Adobe Acrobat document in .PDF format), reminded us:

It is of interest to note that decadence is the disintegration of a system, not of its individual members. The habits of the members of the community have been corrupted by the enjoyment of too much money and too much power for too long a period. The result has been, in the framework of their national life, to make them selfish and idle. A community of selfish and idle people declines, internal quarrels develop in the division of its dwindling wealth, and pessimism follows, which some of them endeavour to drown in sensuality or frivolity. In their own surroundings, they are unable to redirect their thoughts and their energies into new channels.

Decadence is a moral and spiritual disease, resulting from too long a period of wealth and power, producing cynicism, decline of religion, pessimism and frivolity. The citizens of such a nation will no longer make an effort to save themselves, because they are not convinced that anything in life is worth saving.


By that measure, parts of these United States are verging on decadence today (bearing in mind that 'decadence' and 'decay' stem from the same root term).  I submit that the re-election of President Obama is evidence of that.  His first term was, indeed, one of 'cynicism . . . pessimism and frivolity'.  I expect no better of his second term.  The 'welfare state' and, in particular, the 'entitlement culture' are the modern expressions of social decadence - 'something for nothing' for anyone who wants it.

Some expect this ongoing decadence and decay to lead to social upheaval and revolution.  For example, Jack D. Douglas wrote today:

We're now in a lull before a vast, revolutionary storm.

The one thing we can be sure of is that we have sunk so far so long and are now accelerating down so fast that this cannot continue long without producing an implosion or a vast social revolution.


I'm not so sure.  I don't foresee a sudden galvanic social upheaval (although one is possible if the economy collapses, I suppose).  Instead I expect a continued darkening of our outlook and our society, as if, on a bright sunny day, gathering clouds blocked out more and more of the sun, imposing gray gloom where there had previously been light and happiness.  I fear we're going to have a lot less of the latter, and a lot more of the former, over the next four years.

I'll be delighted if events prove me wrong . . . but I'm battening down the hatches for myself and those who are close to me, because I don't think I am.

I talked with my daughter last night. She had tears in her eyes as she told me, "It is so sad to see you dad. Knowing you are having to watch the country you love, the one you've sacrificed for, dying before your eyes."

This is no longer the America that I grew up with. It's not the one that I learned about in Civics or lived in for so long. This is a decadent Amerika. Descending into a cesspool of selfishness, foolishness, and willful delusion. Black is white, wrong is right and how dare you tell me that this is wrong, dangerous, evil, etc.

I'm with you. I'm preparing for the storm. While I feel terrible sadness at the shabby state of an elegant experiment, I will still stand for what I believe: Life, Liberty, the pursuit of Happiness, E Pluribus Unum are still the way to live.

By God's grace and help, I will stand with my face toward the future unpleasantness.

STxRynn echoed my sentiments exactly. The America I know and love is gone. The sooner this cesspool it's become implodes the better. The majority of our population is neither moral, literate or informed. Unfortunately, I'm afraid we are in desperate need of a cataclysmic event that will purge our society of the predators and leaches which have permeated our society. In the next four years I see gasoline going over $6.00 a gallon, triple digit inflation and an unprecedented devaluation of our currency. It appears food stamps and Obama phones have become the new thirty pieces of silver. It won't be long now.

Guess what happens to Europe, when America falls?
'The majority of our population is neither moral, literate nor informed.'
Unfortunately, a lot of good people will fall with it.

Se didn't have a revolution the last time we had a Great Depression, (actually, we made things much worse) and I don't know if we will this time either.

I suppose we'll all find out eventually.

My main focus has been on my fears from 2008. They came true. When I read about the compromised voting machines two months ago, I got used the idea of another term, with the same agenda, "Beggar them, let's beggar them and they will capitulate." Half of our country did. I'm tired of being afraid. I shall join STxRynn - face forward, with lots of spine. Bring it on. I shall survive.

If history shows us anything, the 'whimper' of a slow decay is more likely than the 'bang' of revolution.
Each generation is taught to expect less and gets it.

However, a good war could cause the whole thing to come crashing down.

Either way, it's very likely that the next humans to go to the moon will be surprised to find the Apollo 11 detritus sitting there.