Wired has a fascinating article - more like a detective story, really - about how an unknown language was partly decoded and the secrets of a centuries-old arcane society partly revealed.  Here's an excerpt.

The master places a piece of paper in front of the candidate and orders him to put on a pair of eyeglasses. “Read,” the master commands. The candidate squints, but it’s an impossible task. The page is blank.

The candidate is told not to panic; there is hope for his vision to improve. The master wipes the candidate’s eyes with a cloth and orders preparation for the surgery to commence. He selects a pair of tweezers from the table. The other members in attendance raise their candles.

The master starts plucking hairs from the candidate’s eyebrow. This is a ritualistic procedure; no flesh is cut. But these are “symbolic actions out of which none are without meaning,” the master assures the candidate. The candidate places his hand on the master’s amulet. Try reading again, the master says, replacing the first page with another. This page is filled with handwritten text. Congratulations, brother, the members say. Now you can see.

For more than 260 years, the contents of that page—and the details of this ritual—remained a secret. They were hidden in a coded manuscript, one of thousands produced by secret societies in the 18th and 19th centuries. 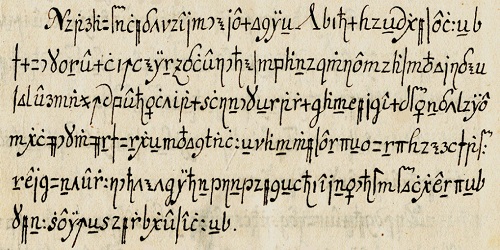 At the peak of their power, these clandestine organizations, most notably the Freemasons, had hundreds of thousands of adherents, from colonial New York to imperial St. Petersburg. Dismissed today as fodder for conspiracy theorists and History Channel specials, they once served an important purpose: Their lodges were safe houses where freethinkers could explore everything from the laws of physics to the rights of man to the nature of God, all hidden from the oppressive, authoritarian eyes of church and state. But largely because they were so secretive, little is known about most of these organizations. Membership in all but the biggest died out over a century ago, and many of their encrypted texts have remained uncracked, dismissed by historians as impenetrable novelties.

It was actually an accident that brought to light the symbolic “sight-restoring” ritual. The decoding effort started as a sort of game between two friends that eventually engulfed a team of experts in disciplines ranging from machine translation to intellectual history. Its significance goes far beyond the contents of a single cipher. Hidden within coded manuscripts like these is a secret history of how esoteric, often radical notions of science, politics, and religion spread underground. At least that’s what experts believe. The only way to know for sure is to break the codes.

It's strange to think that so many of these societies existed, all offering to 'enlighten' their members.  Most of them are now defunct, long extinct, even their so-called 'secrets' lost to us because they encoded them so carefully.  Their 'enlightenment' has gone down into the darkness of history, and been extinguished.  For most of them, it will forever be lost there.  It's a depressing thought.  I hope our generation will do better with our 'modern' understanding . . . although at times, particularly after the last election, I have my doubts!