The prototype was a single-seat aircraft, but a new version (shown below - photograph courtesy of Northrop Grumman) has since been developed with two seats.  According to Aviation Week, it made its first flight on November 12th.

Flown by two Northrop test pilots, the OPV made its first flight from Mojave, Calif., on Nov. 12. Powered by a single Lycoming TEO-540E piston engine, the twin-boom configured aircraft climbed to 3,880 ft. and reached a maximum speed of 100 kt. during a short, 6-min. circuit. 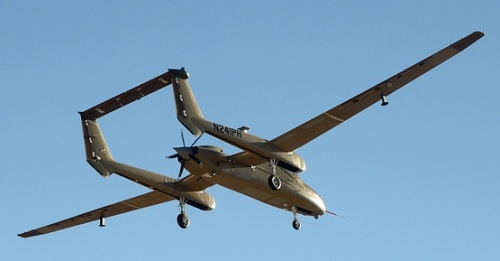 Some 30% larger than the Firebird demonstrator unveiled in 2011, the production-ready variant is 35.5 ft. in length and has a wingspan of 72.2 ft. The second pilot position was added at the request of the customer, adding a new dimension to the concept of a purpose-designed UAV with the option of an onboard pilot ... According to Northrop, the addition of the second seat now gives users the option of a co-pilot and/or sensor systems operator position, while retaining the original goal of providing a low-cost platform for persistent surveillance.

If not being operated in piloted mode, the Firebird UAV is designed to be commanded by a ground station to operate in either line-of-sight (LOS) unmanned mode or beyond-LOS mode.

If you like, you could think of this as a larger equivalent to a General Atomics MQ-1 Predator, but with a two-person cockpit.  The new-model Firebird will go into limited production, with two aircraft being built every year for the next five years.  That makes it basically a hand-built rather than production-line aircraft, and means each individual plane can be modified extensively to meet changing requirements.  I'll be watching to see whether the (so far unnamed) customer is identified, and where these aircraft turn up.  Wherever it is, I'm sure they're going to be doing interesting things.

Not hugely different in basic outline to the old Lockheed P-38...

I was thinking it looked like the old OV-10.

Version 3 will be required to have hard points for 2 Hellfire missiles, 2 500lb bombs, and 2 Sidewinder air-to-air missiles.

The Navy will want one that can land on a pitching carrier at night.

The Marines will want 6 more hard points for air-to-ground ordnance and a hatch between the pilots legs to allow for strafing with his M-4.

The Army, who would probably be the biggest beneficiaries of the aircraft, will be ignored as they are not allowed to have fixed wing aircraft.

Unless the DHS can convince the congress that this will help secure the border against unauthorized Canadians sneaking down from Canuckistan, the project will get cancelled as too complex, heavy, and expensive.

Very reminiscent of the Adam A-500.