I was amused to read about a sundial complete with a miniature cannon.  WorldTempus reports:

It is on the dot of midday in the garden of the Palais-Royal. As happens each day, the cannon attached to the sundial booms, alerting all and sundry that the sun is at its zenith. It is a beautiful summer's day in the 18th century. 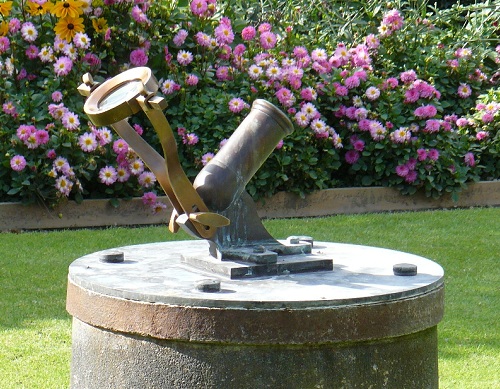 During this period, the precision of mechanical clocks still leaves a lot to be desired. They are liable to lose or gain several minutes each day. So much so that they need regular resetting.

Knowing that the sun is still the best point of reference, a certain Rousseau, a mathematical instrument maker, invented a new type of gnomon in 1785. Comprising a small cannon loaded with gunpowder and mounted by a magnifier accurately tilted towards the sun's meridian passage, this ingenious system is triggered by the concentration of the sun's rays through the lens. It thus allows all those within hearing to set their watches. The one on the lawn of the Palais-Royal was once the most famous example of them ... it was first installed by order of the Duke d'Orleans, the future Philippe Equality.

According to the French caption of the image above (courtesy of Wikipedia), the original sundial cannon was stolen in 1986, and replaced with a replica (as shown).

I'm drawing up plans right now to put one of those in the yard.
Too cool.