It's not often you see a US-built F-16 flying in formation with a Soviet-built MiG-21 fighter, but in August there were plenty to be found in the skies over Romania.  Lockheed Martin's Code One magazine reports:

More than 150 US Air National Guardsmen from the 187th Fighter Wing, the Alabama Air National Guard unit at Dannelly Field ANGB in Montgomery, deployed to Romania in August to participate in Dacian Viper 2012, a three-week joint exercise with the Romanian Air Force.

The Guard contingent, which included nearly twenty fighter pilots and eight F-16s, exercised with approximately 200 Romanian soldiers, technical staff, and pilots flying six MiG-21 Lancers [a version of the MiG-21 upgraded by Israel] at 71st Air Base, located near the town of Câmpia Turzii in the northwestern part of Romania. 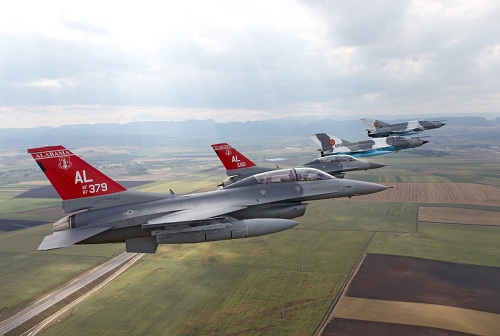 The flying portion of Dacian Viper enhanced the tactical skills of the US and Romanian fighter pilots by providing an opportunity to perform common flight and training activities. The aerial missions also allowed for an exchange of experience on tactics, techniques, and procedures for basic fighter maneuvers, air combat maneuvers, intelligence, tactical command, and cross service logistics support. 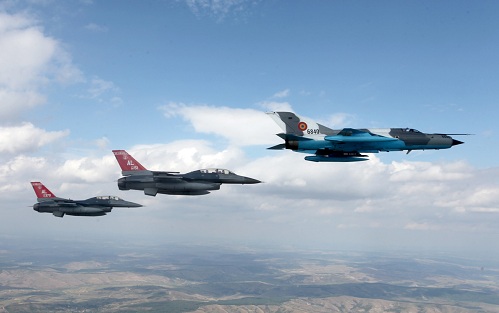 The final days of the exercise focused on combined air operations, in which US forces partnered with Romania pilots to exercise common air operations procedures. “Both units benefitted from the joint training,” added Sparrow. “Exercises like Dacian Viper improve the integration between our nations. We were impressed with the proficiency and capabilities of the Romanian pilots. They are a lot like us.”


There's more at the link.  Images are courtesy of the USAF - larger versions are available at the previous link.  There are many more photographs at the Dacian Viper 2012 Facebook page.

It brings back memories of the Cold War to see two former adversary aircraft flying together like that.  When they faced each other in combat in the Middle East, the F-16 outperformed the MiG-21 on almost every occasion.  I'd be interested to find out how much the Israeli upgrades to the Soviet aircraft improved its performance during the exercise.