The first Mobile Landing Platform (MLP), USNS Montford Point, was floated from her construction dock earlier this month, and is now completing her fitting-out in San Diego. 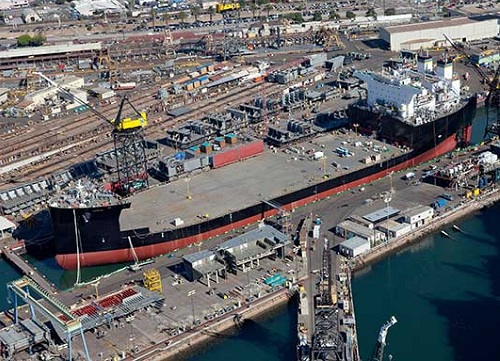 She represents a new, still experimental approach to the problem of getting heavy equipment off Navy transports and onto smaller craft that can carry it to beaches and other landing sites for amphibious operations.  Global Security describes the idea like this:

Mobile Landing Platforms, or MLPs, are being developed to facilitate at-sea cargo transfers. A platform that partially submerges in water and allows cargo to float on and off of it, the MLP is essentially a "beach" that links a roll-on/roll-off cargo ship to small, barge-like watercraft that can deliver the equipment from the sea base ashore. 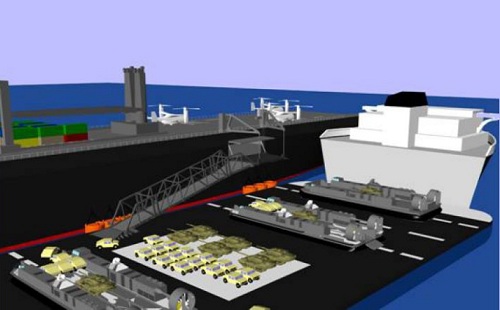 The Mobile Landing Platform (MLP) is a 34,544 MT displacement carrier for LCACs [Landing Craft Air Cushion]. It would also function as a staging position for doing some of the assembly of forces. The MLP would be a troop carrier, carrying 1,112 Marines, and a place where forces could be matched with their equipment before being transported ashore on LCACs or via aviation assets. The ships would be about 800 feet (250 meters) long and built to commercial standards, with a maximum speed of about 20 knots.

They would have the ability to "pump up and pump down" to ease taking on cargo which requires dry towing across open water ... The semi-submersible MLP would be designed specially for float on / float off transport of LCACs. The self-contained ballast system allows accurate control the entire sumbersion and lifting process from the safety of the control room. Unobstructed decks and high deadweight capacity give flexibility in placement.


There's more at the link.  It certainly looks like an interesting concept.

My major concern is that the MLP's are being designed and built to commercial rather than military standards.  That will certainly save money (which is the whole idea, of course), but it also means they can't absorb damage the way a warship can.  They're also considerably slower than most warships, making them more vulnerable and taking longer to get into position;  and they carry no armament, not even defensive systems.

If I were an enemy wanting to stop US forces getting ashore, and I knew that one or more links in the amphibious landing chain were easier to attack and damage than others, guess which links I'd target first?

Look for this same platform to be the basis for the navy's new anti ballistic missile battery ship for protecting the fleet.

The developing concept between the Navy and Marine Corps is based on "ship-to-objective maneuver" which envisions the Gators (and, presumably these vessels) operating entirely over the visual horizon--say, 25 nmi--from shore. Combatants only would approach the beach. That of course, ignores the very real threat that anti-ship missiles of various types pose.

I would anticipate that the flexible nature of the LCACs when searching out landing zones would assist the survivability of such vessels. Rather than having to "kick the door" at a heavily defended beach, you locate someplace fairly out of the way and lightly defended, pound the living daylights out of what few defenses there are (using carrier air groups, cruise missiles, and ship based cannon, maybe even the new railguns), and then just motor the Flo/Flo in closer.

Moreover, the range of LCACs and Ospreys is long enough that these things can essentially be parked over the horizon, making them much harder to target unless you have some really impressive firepower right on the beach.

I think the survivability argument is a good one, but I also think the doctrine for use has likely taken that into account.

Came across a pic and reference to "Mulberrys," and this reminds me of a more "sporty" (that is to say un-tethered and mobile) version.
Dad's buddy Max worked on those D-Day +1, 2, 3, 4, in "the Army's Navy".