. . . and for Gun Owners of America, and the Second Amendment Foundation, and Jews for the Preservation of Firearms Ownership, and the Pink Pistols, and any and all other pro-Second-Amendment and pro-gun-rights groups.

It appears certain that the Administration is going to take action to restrict or take away some or all of our Second Amendment rights and freedoms.  Vice-President Biden made that clear today.  As I pointed out on Monday:

I believe there is enough enmity stored up in Washington against the NRA, gun-owners in general, and those whom President Obama once accused of 'clinging to guns and religion', that those now in power are acting out of a sense of vengefulness.  They appear to actively want to provoke a conflict with gun-owners and their political representatives, because they believe that the Newtown massacre has given them sufficient political capital and popular momentum to force such measures down the throats of the American people - even if they're blatantly un-Constitutional.


Very well.  The Administration is going to fight on our turf . . . so why don't we, the firearm owners and Second Amendment supporters of America, fight on theirs?  If they want a fight, let's give them one!

My proposal is this.  Last month I noted that certain states with Republican-controlled legislatures and/or governors were considering changes to how they appointed their representatives to the Electoral College every four years, to elect the President.  Instead of giving all their electors to the presidential candidate who gained the majority of votes in their State, they're thinking of allocating them on the basis of each congressional district.  The candidate who gets the most votes in each congressional district would get that district's electoral vote.  The two electors per state who represent its Senate seats could go to either the presidential candidate winning the popular vote in that state, or the candidate winning the majority of its congressional districts.

Any changes to the allocation of Electoral College votes would have a major impact on each party's path to the White House. Eighteen states and the District of Columbia have given Democrats their collective 246 electoral votes in each of the last six elections. That virtually forces Republicans to run the swing-state table.

But rewriting the rules would dramatically shrink or eliminate the Democratic advantage, because of the way House districts are drawn. The decennial redistricting process has dumped huge percentages of Democratic voters into some urban districts, while Republican voters are spread over a wider number of districts, giving the party an advantage. This year, Democratic House candidates won more than 1 million more votes than Republican candidates, but Republicans won 33 more seats.

And if Republicans go ahead with their plan, Democrats don't have the option of pushing back. After the 2010 wave, Democrats control all levers of government in only one state -- West Virginia -- that Romney won this year. Some consistently blue presidential states have Republican legislatures; the reverse is not true.


There's more at the link.  If this plan had been in force last year, Hot Air produced this graphical representation of Congressional districts to illustrate how it would have affected the 2012 Presidential race: 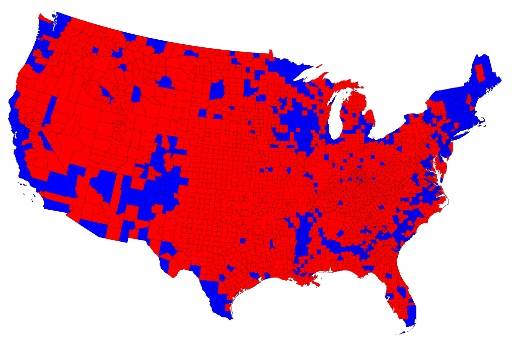 If that plan had been in effect across the country last year, we would now be preparing for the inauguration of President Romney.

I propose that the NRA, GOA, SAF, JPFO, PP and every other pro-gun organization out there put all their political clout, influence, fund-raising abilities, and grass-roots support behind persuading the legislatures of as many states as possible to adopt this change.  According to Wikipedia, the Republican Party currently controls 27 out of the 50 states, and shares control of a number more.  I'm sure there are conservative, Second-Amendment-supporting Democrats in some of the latter states who could be persuaded to support such a measure.

If we all work together, and work hard, I see no reason why, by the next Presidential election in 2016, more than 30 states could not have adopted this approach.  I think this would so drastically reduce the collective strength of the 'blue vote' that it would dramatically alter the US political landscape . . . and suitably punish President Obama and the Democratic Party for their current slash-and-burn drive to demonize Second Amendment supporters, and limit or minimize their constitutional rights.

I, for one, am not prepared to tolerate such action on the part of the Administration;  and if they want to play rough, I think the firearms owners of America are numerous enough, and angry enough, to take the fight to them.  This is one way we can do so which is entirely legal, doesn't involve any violence or criminal action at all, but can nevertheless deal a stunning, perhaps crippling blow to our enemies' political aspirations.

I'd like to ask all my blogger friends who read this to please publicize the idea, and my readers who are supporters of the Second Amendment to get hold of their political representatives and gun rights organizations to which they belong, and ask them to support it.  Let's see what we can do.

EDITED TO ADD:  I'm not a Republican Party supporter.  I've said many times in these pages that I distrust both the Republican and the Democratic parties.  Each appears to be entirely self-serving and myopically partisan in its own way, putting its own interests ahead of those of the nation.  The Republicans have just cravenly surrendered over the 'fiscal cliff' issue, which gives me neither grounds for optimism, nor any reason to trust them, over gun control.

Let me be clear.  The purpose of this proposal is not to support a particular political party:  it's to retaliate against those who are attacking our Second Amendment rights.  If they attack that which we hold dear, we need to respond by attacking that which they hold dear - namely, political power.  If we can make it much more difficult for them to retain power, or easier for their opponents to regain it, we hold a weapon they'll be forced to take into account.

If they leave us alone, I see no reason why we shouldn't leave them alone.  If they want a fight . . . well, two can play at that game.  This is one way to do that.  There may be others that will be more productive.  If you can think of any, please share them with us in Comments, or on your own blog.

This is an excellent point. People are ready to jump to extremes, which is understandable considering the threats facing us. That being said, there are still quite a few peaceful means to enact change to protect ourselves.

At this time the districts seem to give the GOP the upper hand in this plan but that's only because the winner take all system in the "blue" states makes the "red" districts in those states irrelevant in the Presidential election. You can't expect that to remain static if the electoral votes are apportioned by district.

I'm also would not assume the GOP is pro gun. There are a lot of squishy RINOs and establishment drones that would be perfectly happy with confiscating guns from civilians.

I much prefer this idea to the very thought of picking up the black arrow.

Personally I would rather see a resurrection of the original method of choosing the VP. It he original method, the presidential candidate with the second highest vote count became the VP. Personally I think the government could stand to have a bit more friction in the gears.

This would only work if the change were made across the board in all states. If it was only done in the red states the net difference may constitute a loss.
In TX for example. Our delegates all went to the Republic side. If we did it my district there would be delegates allocated to the other side around big cities.

I dunno. I can understand wanting to smack the Demonrats on the nose with the rolled up newspaper, but... perhaps we should take some time to consider the potential unintended consequences of giving the Rethuglicans a permanent Presidential electoral majority.

I mean no disrespect to anyone but I am glad I live in Canada and I don't have to deal with all this nonsense.

I don't own a gun, never have owned a gun, and never will own a gun.

I don't feel the need to own one ever. I have used them when I was in the military and I have friends who own hunting rifles but the whole right to bear arms thing seems to loose focus about how it was probably intended.

My last 2 cents... we are not talking about guns but pistols and rifles. Guns are towed by a vehicle and can lob a 33lb shell 11kms to a target. That's what they taught us in artillery training.

If this is to happen we must act quickly. I also suggest that each person seriously consider becoming involved with the local Republican Party. While I am not the biggest fan of the party, for reasons similar to Peter's, I recognize the following as true: 1)The GOP at least gives lip service to things that are important to me, including the 2nd Amendment, 2)the GOP possesses a nationwide organization and 3)each level of the party chooses delegates for the next level convention (precinct to county, county to state, state to national). We have enough time, but just barely.