Continuing the series we started last week, here's another food event that made it into the Guinness World Records.  It's the world's largest chocolate coin - a chocolate replica of a one-Euro coin, scaled up at 85:1! 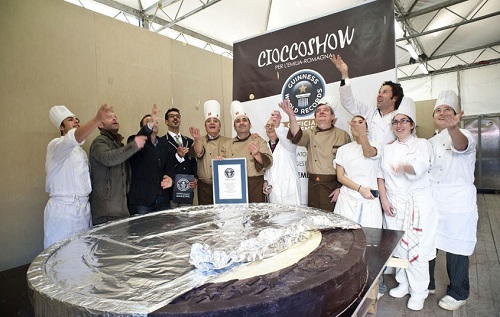 The monster coin weighed 1,447 pounds 10 ounces, and measured 6 feet 5 inches across by 6.7 inches thick.  It was unveiled at the Cioccoshow 2012 chocolate fair in Bologna, Italy on November 15th last year, which was the official Guinness World Records Day 2012.

I have a thought.  Since some idiots politicians and journalists are discussing the merits of minting a platinum coin valued at $1 trillion to help solve this country's debt limit issues, why not use a chocolate coin instead?  It's got as much chance of success as a platinum one - and at least, when it fails, you can eat the damn thing to console yourself as the economy collapses around you!

With fiat currency, the medium is irrelevant.

In all 3 cases the American public rejected the ides of a coin and stuck with the good old greeback dollar.

Now, with Obama "The Fiat Man" at the helm the talk is that a new $1 coin will be launched in conjunction with the WITHDRAWL of the paper dollar.

Maybe Der Leader figures that by minting billions of new metal dollars that would curtail the supply of steel & Nickel going to make AR-15's.

Get ready for the European Union brand of money here soon. They have Eight (8) coins in circulation as oposed to 4 in the U.S.:

Maybe it would be easier to just import some of that old Zimbabwean currency.

Has anyone figgured out how LARGE this trillion dollar coin would be? Is there enough platium, Pt 78, in the this world that a coin of that value could be minted? How heavy would this be one minted?
I belive not.