I've been aware of a well-known incident where an Alaska Airlines Boeing 737 hit a fish dropped by an eagle as it (the plane) took off from Juneau, bound for Yakutat.  The 'seven-thirty-seven' apparently became unofficially known as the 'salmon-thirty-salmon' among those involved. 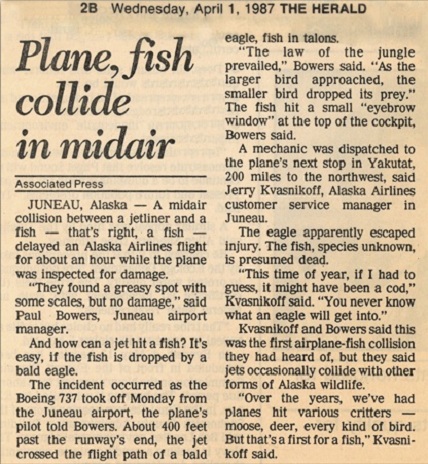 You can read more about the incident here.

I came across this plane-versus-fish encounter while looking for information in connection with another article I'm preparing.  I'd heard of the Alaska incident before, but was very surprised when my Internet search turned up not one, but four such encounters!  Another took place in Canada in 2009, where an airliner flying from Hamilton to Calgary was found to have the remains of a fish - and the osprey that had presumably been carrying it - embedded in its fuselage.

The one that made me giggle was alleged to have occurred at what was then the Langley base of the US Air Force (now Joint Base Langley-Eustis).  It was mentioned over at the F-16 Forums.  Here's an extract.

During take off a Flight of F-15's took off eastbound, about the same time Pelican took off from the bay. The Pelican wisely dropped his load to get out of the was of the flight taking off. His lunch hit right on the canopy of the lead F-15.

The lead then called in a fish strike, I think the tower has him repeat that 3 times. A call went out of the maint and emergency dispatch channels, as he declared an IFE.

When the aircraft reached the parking area, it was mugged by Sr NCO's and Officers. The pilot did not even leave the cockpit before the crew chief was on the latter.He went directly to the frame and pulled out a band of scales. After the scales were found the attitude in the area changed. Some one took photos for the base, they probably have them in an archive some where.


That made me laugh!  I can just imagine the control tower staff thinking, "Yeah, wise guy!" when the pilot called in an IFE (in-flight emergency).  I wonder how long he took to live down the fishing jokes at his expense?

Finally, a de Havilland Dash-8 turboprop airliner was struck by a fish while taking off from London, Ontario in 2009. Witnesses say an osprey flying overhead dropped the fish, which scored a direct hit. The funny part of this incident may be found on the PPrune Forums, where members came up with an endless series of puns to describe what had happened. A few examples:

No photos of the scale of the damage?
They must have been floundering on finals.
Thankfully, no injuries on board - nobody had to call a sturgeon.
If I hadn't read the press report I'd have thought it was a load of old pollacks.
Guess he was in the wrong plaice at the wrong time.


There are many more at the link. Giggle-worthy!