I note with horrified fascination that Mr. Brad Sciullo has entered the eating record books in spectacular fashion.

It took Brad Sciullo 4 hours and 39 minutes to finish a marathon. A meat marathon, that is. The 5-foot-11, 180-pound western Pennsylvania chef is the first person to eat a monstrosity called the Beer Barrel Belly Bruiser: a 15-pound burger with toppings and a bun that brought the total weight to 20.2 pounds. 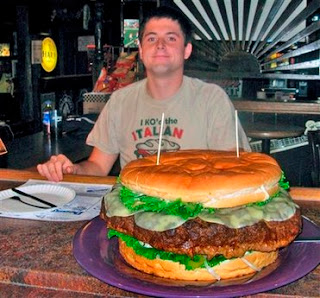 The mountain of beef is the product of Denny's Beer Barrel Pub, about 100 miles northeast of Pittsburgh in Clearfield.

Sciullo, 21, of Uniontown, said he was surprised he finished the sandwich Monday. "About three hours into it, things got tough," he said. 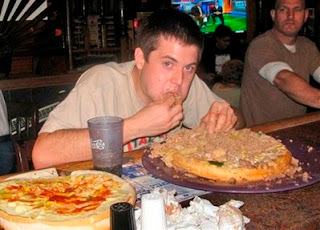 When asked what possessed him to eat a burger that big, Sciullo said: "I wanted to see if I could." 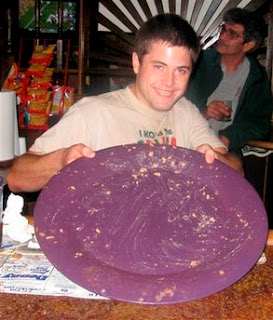 For completing the challenge in the under-five-hour time limit, Sciullo won $400, three T-shirts, a certificate "and a burger hangover, as I call it," Liegey said.

I'm stunned! According to a quick Internet search, ground beef with a 10% fat content (probably a rather better quality of meat than that used to make this burger, judging by what's typically used in a fast-food joint) contains 798 calories per pound. That means Mr. Sciullo ate 11,970 calories in meat alone, plus the calorie content of all the trimmings, which must have come to at least another thousand or two.

Given that a normal active male would need about 2,500 calories per day, that's got to be close to a week's nutrition requirement! I wouldn't have believed it possible that a single human digestive system could accommodate that amount of food!

The report notes that Mr. Sciullo accomplished this feat on Monday this week. I think I can venture a guess as to where he's been spending most of his time since then!

I recall from a documentary on the US Navy SEALs that on their SEAL/S course they burn 15000 calories a day. Maybe he's working up to it?

Olympic swimmer Michael Phelps eats 12,000 + calories a day, even when he's not competing.

At the University of Paris Island, skinny recruits are typically told to eat two helpings of every meal under penalty of death. It had to be 8000 calories a day for 16 weeks.