If so, the Green Door Bar & Grill in London, England has just the meal for you.

A restaurant is offering a taste of the life of a polar adventurer with a new menu inspired by the exploits of Sir Ernest Shackleton that packs in a mammoth 6,000 calories.

The £75 [about US $133] four course blow-out includes pork scratchings, a 20oz steak and 'hoosh', a thick stew eaten by the pioneering explorer, all washed down with wine, beer and an ice cream shake. 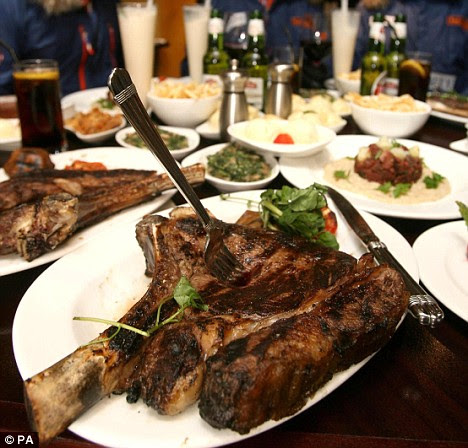 The meal, which is being offered at the Green Door Bar and Grill in London, contains three days worth of an adult woman's recommended calorie intake.

But it represents the amount that a seven-strong British team hoping to complete Shackleton's failed journey to the South Pole a century ago must eat each day to maintain their strength.

Henry Worsley, leader of the modern-day adventurers, said: 'Obviously this isn't a meal for the faint-hearted, but I'm sure there are a few people in the City who'll be up for the challenge.

'There will, of course, be honour and recognition in the case of success.' 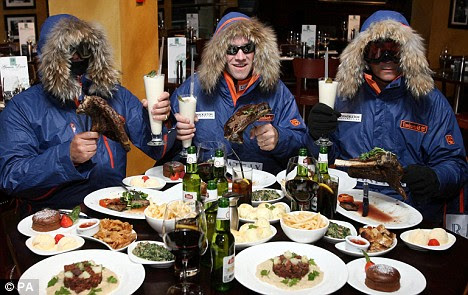 There is a modern twist on the hoosh - while Shackleton and his men made it with penguin, the version served to 21st century diners in London will use goose.

For every meal sold, the restaurant will donate £10 to the Shackleton Foundation, a new charity to fund projects embodying the adventurer's spirit and hunger for 'calculated risk'.

Alexa Reid, managing director of Green Door, said: 'I've always been a huge fan of Shackleton, and when I heard about the expedition, I thought that this would be a great way to get involved.'

Personally, I think I'd start to fade after the first 2,000 calories or so!

oh my goodness.
I feel a little sick!

Read "Endurance" by Alfred Lansing to get a feel for what the Shackleton Expedition endured... Over a year on the ice, and eating 'hoosh' *every* day...

My stomach turns at the sight of such gargantuan portions.