When kings and businessmen fall out


I'm hugely amused by the fuss and bother currently going on in the so-called 'Kingdom Of Wallachia' in the Czech Republic.

For a fictional place, the Kingdom of Wallachia has many of the trappings of a real-life realm – a flag, a currency, a university, a state limousine and a national passport. Now it can add a bitter power struggle to the list, for a very peculiar coup d'état has just shaken this quiet corner of central Europe where the line between fantasy and reality has become increasingly blurred.

The real Wallachia is a small mountainous region (about the size of Luxembourg) in the south-eastern corner of the Czech Republic. In 1997, the writer and photographer Tomas Harabis dreamt up the Kingdom of Wallachia as the perfect gimmick to attract tourists to the region. It worked. The kingdom grew into one of the most successful tourist ventures in the country, with King Boleslav the Gracious as its ceremonial head of state and Mr Harabis as the foreign minister dealing with the day-to-day operations. But now the elaborate practical joke has become distinctly unfunny.

Something began to turn rotten in the Kingdom of Wallachia when King Boleslav – the Czech comedian Bolek Polivka – allegedly started to take his make-believe role too seriously. He demanded power over the economy of his dominions, that is to say, a stake in the real-life tourist enterprise.

A bitter – not to say surreal – battle has raged for years, with the king fighting the foreign minister for control of the fictional realm. Now a Czech court has ruled that Mr Polivka has no right to profit from any association with the "kingdom" created by Mr Harabis, 36. Whether the ousted king will go quietly is another matter.

decade ago. "We have many of the features of a real country – a flag, a currency, a university, a state limousine and even a passport," he explains proudly. No matter that the Jurovalsar currency cannot be used anywhere; or that the only degree offered at the university is the Faculty of Distilling's course in making and drinking slivovica (plum brandy). The state limousine is a bright yellow, Communist-era Trabant, with a plastic body and two-stroke engine; and the passport is by no means a legal travel document, although Mr Harabis claims that he once used it to get into Alaska from Canada. 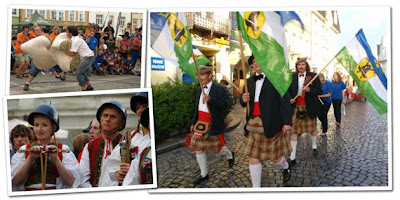 In 2000, a big ceremony was held to crown the first king. As a comedian, Mr Polivka seemed like the obvious choice, and he duly became Boleslav the Gracious. "Unfortunately, the king soon started confusing fiction with reality, and tried to rule the kingdom's economy," Mr Harabis said. "But the kingdom is run by my company, and we couldn't let him interfere with our contracts, business partners, and money."

Particularly when, after some difficult early years, the gimmick has begun to pay very real dividends. More and more visitors began venturing the 200 miles from Prague to the eastern Czech Republic to visit Wallachia, which has a distinct culture and dialect heavily influenced by the Romanian shepherds. The herders settled here centuries ago, driving their flocks along the arc of the Carpathian Mountains from Transylvania, and their black hat even graces the kingdom's official crest.

The kingdom has its own guidebook, providing information on its eccentric history and immigration requirements, as well as on how to tell the weather in Wallachia with nothing more than a shoelace. "Carefully observe the shoelace for at least one minute (the longer you observe it, the more precise your measurements will be) ... If the shoelace is wet, it's raining ... If the shoelace is moving, the wind is blowing."

But the spat between King Boleslav and his foreign minister has cast a shadow over this bucolic (and comic) idyll. Mr Polivka insisted that he had a right to use the Wallachian trademark because, on a 1993 television show (well before Mr Harabis launched the realm) he had jokingly named himself King Boleslav of Wallachia. Mr Harabis begs to differ. "On his show he named himself king, president and chief clown, but of the Republic of Wallachia, not the Kingdom – it is a completely different thing."

Relations between the pair soured when Mr Polivka allegedly demanded one million Czech crowns (£32,000) for his services, which would have driven the firm into bankruptcy. "Wallachia is a real place with real people and a real economy, but our promotion of it is humorous," he said. "Unfortunately, Bolek Polivka and the people around him became unable to distinguish the facts from the fairytale."

In 2001, Mr Harabis staged a palace coup and installed a well-known folk singer as Queen Mother, but that did not stop Mr Polivka contesting the throne. Last week, Mr Polivka's fight to win sole rights of the trademark ended in a provincial Czech court. "The court ruled that Polivka cannot make money out of the Kingdom, or manufacture anything with the Kingdom of Wallachia trademark," said Mr Harabis.

Boleslav the Gracious has no intention of slipping away into silent exile. Mr Polivka was not available for comment as he was filming his television show but one of his aides, Marek Zouhar, said he would "play on". "The court case was only about the trademark, no court has forbidden Mr Polivka from playing the King of Wallachia," Mr Zouhar said. "We're planning lots of events for the king."

However, a new monarch is settling into life on the throne. A local engineer, Vladimir Zhanel, won a recent "battle of the knights", defeating all-comers in singing, dancing and a series of peculiar Wallachian games to become King Vladimir II. 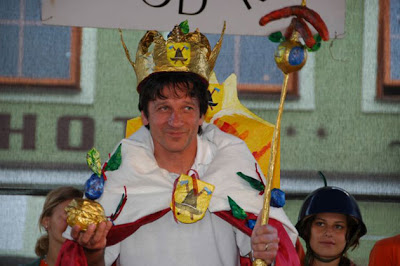 Mr Harabis insisted: "Being Wallachian is not about where you're from – it's about your heart and spirit. Anyone can be king." Unless, of course, your name is Mr Polivka.

Hmm. Perhaps I should apply for the post of Royal Chaplain! Sounds like a fun place to work!