I'm both interested and amused by the news that a chimpanzee is helping to raise two white tiger cubs.

When two white tiger cubs were born during a hurricane they had to be separated from their mother after their sanctuary flooded.

However they have since found an unlikely surrogate mother in chimpanzee Anjana, who has taken on the role of caring for the cubs.

The two-year-old chimp has been helping keeper China York care for the 21-day-old cubs at The Institute of Greatly Endangered and Rare Species (TIGERS) in South Carolina. 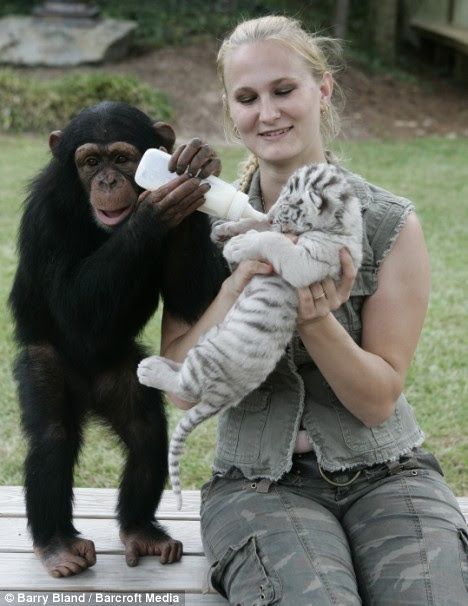 'Mitra and Shiva, were born during Hurricane Hannah,' said Dr Bhagavan, founder of TIGERS. "During that time everything flooded in the sanctuary and they had to be moved into the house as their mother became stressed.

'It was important for their safety that they were separated.'

Placed into the care of infant animal care giver China and her chimpanzee companion, Anjna, the cubs have become almost inseparable from their new motherly figures.

Dr Bhagavan added: 'China's role means that she is care giver to hundreds of animals when they are born.

'Anjana has been with China, side by side, ever since she was born and has joined her in caring and raising baby animals.

'So she helped her and acted as a surrogate mother to these animals and she has done these same with these baby white tigers.

'She gives them a bottle, lies with them and acts as a surrogate mother. She has a close contact and bond and gives them a nurturing.' China has looked after Anjana the female chimpanzee since she was born, and they have been inseparable ever since.

This has also resulted in Anjana copying China's caring behaviour.

'She has raised leopards, lions, orangutans,' said Dr Bhagavan. 'Monkey see as monkey do, and she has taken on this copycat personality and helps China raise the animals.

'She has just finished raising four lions and they were inseparable. She is a great assistant.'

It's a lovely story, and the pictures are heartwarming . . . but what about when the tigers get a little larger? Don't they normally eat monkeys and apes? Will their pleasure in Anjana's company turn into a rather more . . . er, digestive anticipation? I suppose they'll be separated from her before they get old enough to want to eat her, just in case!

It's an interesting thought. I've seen predators raised by humans remember their foster 'parents', and show them affection in adult life instead of attacking them, as they normally would. I've helped to raise cheetah cubs at a sanctuary in South Africa, and remember them with great pleasure. A very well-known example is Christian the lion.

In 1969 a young Australian, John Rendall and his friend Ace Bourke, bought a small lion cub from Harrods pet department, which was then legal. ‘Christian’ was kept in the basement of a furniture shop on the Kings Road in Chelsea, the heart of the swinging sixties. Loved by all, the affectionate cub ate in a local restaurant, played in a nearby graveyard, but was growing fast…

A chance encounter with Bill Travers and Virginia McKenna led to a new life for Christian. He came to live in an enclosure and slept in a caravan at their Surrey home. Then in 1971 he was flown to Kenya, his ancestral home, and returned to the wild by lion-man George Adamson. Almost a year later in 1972, John and Ace returned to Kora in Kenya and it is their reunion with Christian at this time that is shown in the clip.

It was an emotional reunion: “He ran towards us, threw himself onto us, knocked us over and hugged us, with his paws on our shoulders.”

Christian left the Kora Reserve in 1973. George Adamson believed that he made his new territory along the Tana river, but when the Wakamba herdsmen brought their livestock to his hunting ground, he moved on. George said in his autobiography, "I used to count the days on which we hadn't seen Christian, but when they reached 97, I gave up recording them in my diary." Because a lion can live from 12 to 15 years in the wild, Adamson believed that Christian ended his days in the Meru National Reserve only a few miles up river.

The clip below is of a recent interview with Rendall and Bourke.