I've written about modern adventurers in the past, including James Castrission and Justin Jones, who crossed the Tasman Sea by canoe, and Kenichi Horie, who sailed from Hawaii to Japan in a boat powered by the motion of the waves, arriving on July 5th.

Now British sailor and adventurer Pete Goss has set out to sail from England to Australia, accompanied by three members of his family. Their boat isn't your usual yacht: it's a replica of a 19th-century fishing lugger, the Mystery, which made the journey in 1854. 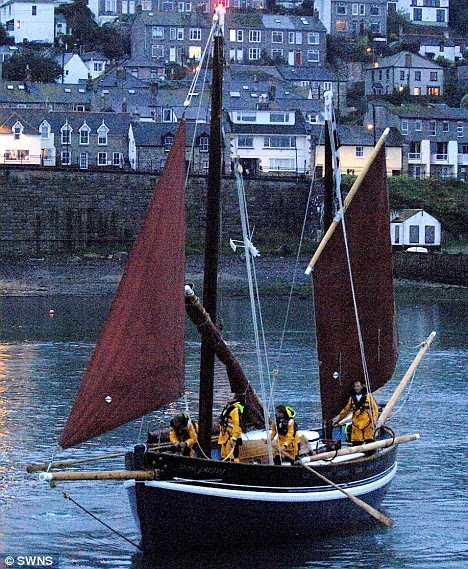 The original journey was quite an achievement. One of her crew, Philip Curnow Mathews, wrote to the Cornish Telegraph newspaper in October 1874, describing the journey.

Referring to a paragraph that appeared in your issue of the 3rd of June, relative to the voyage of the fishing boat Mystery from Penzance, Cornwall to Melbourne, Australia, I would wish (if you can find space in your valuable columns) to make a few remarks in connection with the voyage.

Before doing so allow me to correct one or two errors you made. We never betook ourselves to fishing, as you stated; but sold the boat almost immediately after our arrival at Melbourne and followed other avocations. The Mystery was 16 tons (builders measurement) not six tons, as appeared in your columns. She was 33 feet length of keel and 11 feet 6 inches breadth of beam.

We left Mount’s Bay on the morning of the 18th of November, 1854, with a crew of seven men – Richard Nicholls, Job Kelynack, Richard Badcock, William Badcock, Lewis Lewis, Charles Boase, and myself. Our cargo consisted principally of provisions and water. On March 14th, 1855, we cast anchor in Hobson’s Bay, Melbourne, thus accomplishing the voyage in 115 days, including seven days stoppage at the Cape of Good Hope, where we put in for a supply of water. We were eight days from England to Madeira, and on the 35th day out we made the Island of Trinidad. On the morning of the 17th of January 1855 we arrived to the Cape of Good Hope, being 50 days out. On January 24th at 6 p.m. we got underway from Cape Town and proceeded on our voyage with H.M. mails on board. 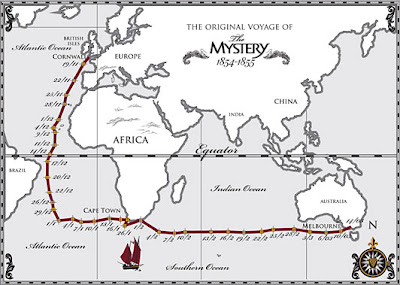 Nothing interfered with our progress until February 18th, in lat. 40.5 south, long. 82.25 east, where we encountered a very heavy gale, which necessitated our riding to a raft for nine or ten hours. Riding to a raft is a system adopted for safety. Ships heave-to under such circumstances. On February 23rd another heavy gale visited us in lat. 39.57 south, long. 98 east. We again rode to a raft for four or five hours. On the 5th March we met with another very heavy gale in lat. 40 south, long. 129.19 east, which compelled us to ride to a raft for 12 or 14 hours. The weather was pretty favourable after that date until we got to our destination.

Of the seven men who came to Australia five returned to their native home. I have seen the death of Mr. Charles Boase, one of the crew, in your obituary of the date referred to, making three deaths out of five. Lewis Lewis died in Castlemaine Hospital, Victoria, some ten years ago. I am the only one of the crew now remaining in this part of the world. I would also inform you that the Mystery is the smallest craft on record that ever made such a long voyage. By inserting the above you will greatly oblige one of the Mystery’s crew.

I have the honour to be, sir, your most obedient servant,

Mystery's arrival in Australia was announced by the Shipping Gazette and Sydney General Trade List, of 26th March 1855, as follows:

On Thursday last there arrived in Simon’s Bay, the Mystery, a small fishing smack of 16 tons, from England, bound to Melbourne. The little gallant adventurer has made an excellent passage of 60 days. On her arrival in Simons Bay, she was considered to be a Table Bay cutter, and on that account was not boarded by the Harbour Master. He did not know the real character of the diminutive craft, until he observed the captain and his crew quietly beaching their bark and hauling her with ease on the shore.

The original Mystery was sold by her crew in Melbourne for £150. She was in use as a pilot cutter in Rockhampton, Queensland, when she was wrecked on March 26th, 1869. Her crew were saved.

Speaking of his re-enactment of Mystery's voyage, Pete Goss says:

I guess I was vaguely conscious of the Mystery but not really aware of it until I heard from Campbell McKenzie and Diana Berry about four years ago. Diana, being related to six of the original crew, wanted to do something to celebrate the 150 anniversary of their voyage. Campbell, quite rightly suspecting that it would stir my interest, came down, introduced us and sowed a seed.

Ultimately, thanks to a variety of circumstances, we didn’t do anything but I found I couldn’t get it out of my mind and would spend the odd spare minute diving into Google to see what I could find. My interest just could not be satisfied and it became clear that this was what I wanted to do next. It’s quite different from any previous projects and I guess I am drawn to it for a variety of reasons. I love wood and have always wanted to build a wooden boat; the voyage is irresistible and the more I find out about these guys the more I feel that their story needs to be told. It’s a perfect project for Cornwall Playing for Success and is something that we can enjoy as a family.

In short I just fancy it and, as in the past, I find that is enough to just get up and go for it. So here we are on the brink of another exciting adventure that has the added element of history which I find I am really enjoying – the kids say that it is because I am getting older and balder and I suspect they are right.

The replica, Spirit Of Mystery, was built using authentic materials and tools. She's shown here after being brought out from the boatshed, during the fitting of her masts. 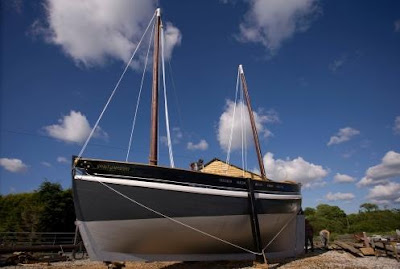 Here she is on launch day. Note that she's fully decked over. This isn't typical of fishing luggers, but was done to the original Mystery to improve her seaworthiness. 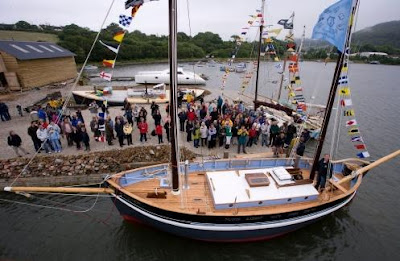 Below the deck is a cabin where the crew will live. The limited space available can be seen in this photograph, taken during construction. 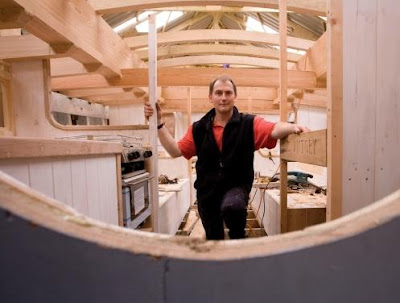 The chart table is made from timber salvaged from Admiral Nelson's flagship, HMS Victory. 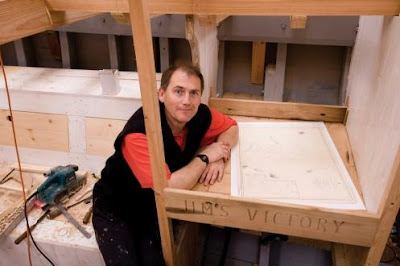 After launch, several months were spent in training the crew to sail the lugger, and learning how she handled in various sea conditions. 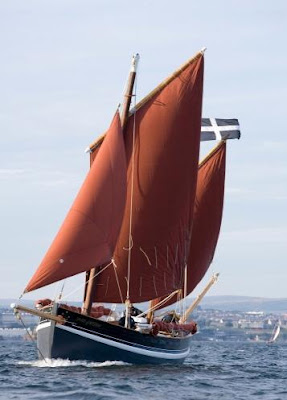 Thanks to Ronald K. for sending me the photographs above.

Pete Goss will be live-blogging the journey. You can follow him and his crew at the expedition Web site. They'll be navigating by the stars, as the original voyagers did. Some aspects of the voyage will be modern, though. Pete Goss admits, "We will however wear Musto HPX and eat the very best of food for I have no wish to eat salt pork and dabble with the possibility of Scurvy."

The video clip below contains an interview with Pete Goss, and shows the launch of Spirit Of Mystery.

We wish them the best of luck! I'll be following Pete Goss' blog at the expedition Web site.