I was fascinated to read of an operation performed on bluegrass musician Eddie Adcock last week.

In the most extraordinary performance of his life, the 70-year-old bluegrass maestro was asked to play his banjo while brain surgeons poked and prodded inside his head.

The doctors - who kept the musician conscious under a local anaesthetic as they explored his brain - were looking for the cause of a hand tremor that was threatening his career.

The pioneering brain operation was yesterday hailed a success and Adcock is now on the road to recovery.

Eddie Adcock is one of the world's most talented banjo players. His fast-picking and distinctive style made him an innovator of bluegrass - a type of acoustic country music.

But in recent years, Adcock's performances suffered as he began to experience mysterious shakes in his right hand.

Adcock's wife, Martha, was the first to spot the problem.

'I noticed his skills were not the same and we were trying to figure out what was going on,' she said. 'It was distressing because this has been his whole life.'

With Adcock anxious that his career was finished, doctors came to the rescue.

They proposed an operation called 'deep brain stimulation' - where an electrode placed in the brain gives tiny electric shocks to suppress the nerve cells responsible for the tremor.

The electrode is connected by leads to a pacemaker implanted in the chest.

Although the procedure is straightforward, identifying the part of the brain responsible for the shakes is not.

So to ensure that the electrode was in just the right spot, surgeons kept Adcock awake throughout the operation at Vanderbilt University Medical Centre.

He lay on a table, clutching his Deering GoodTime banjo to his chest and picking at the strings, while surgeons prodded his brain through a hole in his skull. 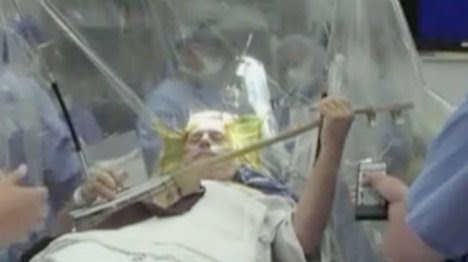 When the surgeons found the right part of the brain, Adcock instantly regained his ability and was able to play at full speed once again.

The operation ended on a high note with a twang of lightning-fast banjo picking.

'I came up in music the hard way and learned to be a trouper fast,' he said.

'Some of those early days were pretty rough, and I've been stomped, cut and kicked; but I never went through hell like this - it was the most painful thing I've ever endured.

'And it was risky. But I did it for a reason: I'm looking forward to being able to play music the way I did years ago prior to getting this tremor. It means that much to me. I'm far from being done.'

The incredible scenes were filmed by one of the surgeons at the hospital, which is near Adcock's home in the country music centre of Nashville, Tennessee.

Dr Joseph Neimat, one of those who carried out the operation, said: 'I knew we would be able to control the tremor. It was returning the dexterity back to his level of play that was really a tall order.'

When the electrode is switched off, Adcock is barely able to draw a spiral on a piece of paper.

But with the pacemaker active, his finger picking skills are as good as ever.

That's pretty amazing! The video clip below shows part of the operation, with Adcock playing his banjo at the surgeon's request, and the electrodes being adjusted.

That's the most astounding music video I've ever seen. Top that, Michael Jackson!

Seriously, it's wonderful that he's got the possibility of regaining his manual dexterity. Well Done, Docs.