There are two real Doofi for your annoyance tonight.

The first (collective) Doofus award goes to the entire team at Nike USA responsible for their athletic promotions. They screwed up mightily at the recent Nike Women's Marathon in San Francisco.

There were over 20,000 competitors in Sunday's Nike Women's Marathon in San Francisco. And 24-year-old Arien O'Connell, a fifth-grade teacher from New York City, ran the fastest time of any of the women.

But she didn't win.

It doesn't get much simpler than a footrace. All it takes is a starting line, a finish line and a clock. You fire the gun and the first person to the end of the course is the winner.

However, as the marathon officials said to O'Connell - not so fast.

While O'Connell had the greatest run of her life and covered the course faster than any woman, she was told she couldn't be declared the winner because she didn't run with the "elite" group who were given a 20-minute head start. 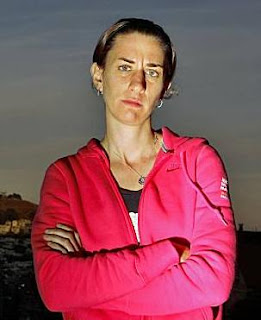 "That's pretty weak," said Jon Hendershott, associate editor of the authoritative Track and Field News magazine, based in Mountain View. "Think of the PR they could have had with this girl coming out of nowhere. It sounds like they got caught totally off guard."

O'Connell, who describes herself as "a pretty good runner," had never managed to break three hours in five previous marathons. But as soon as she started at 7 a.m. Sunday, she knew it was her day. In fact, when she crossed the finish line 26.2 miles later, her time of 2:55:11 was so unexpectedly fast that she burst into tears.

"I ran my best time by like 12 minutes, which is insane," she said.

At the awards ceremony, the O'Connell clan looked on as the top times were announced and the "elite" female runners stepped forward to accept their trophies.

Just to make sure, O'Connell strolled over to a results station and asked a race official to call up her time on the computer. There it was, some 11 minutes faster than the official winner.

"They were just flabbergasted," O'Connell said. "I don't think it ever crossed their minds."

No one seemed exactly sure what to do. The trophies had already been handed out and the official results announced. Now organizers seem to be hoping it will all go away.

O'Connell said some race officials actually implied she'd messed up the seeding by not declaring herself an "elite" runner.

"If you're feeling like you're going to be a leader," race producer Dan Hirsch said Monday, "you should be in the elite pack."

Nonsense, said Track and Field News' Hendershott. He said O'Connell took her best shot, ran the fastest and should have won.

"What's she supposed to do, lay back because she's not an elite runner?" he asked. "If the elites are going to lay back, that's their fault."

Nike later attempted to atone for their error - but in my opinion, they've only made things worse!

O'Connell said she was contacted early this morning by a Nike representative who said they were going to award her a trophy and recognize her as a winner.

Not the winner - "a" winner. Notice the distinction.

"She told me they had been getting lots of calls and e-mails," said O'Connell, a fifth-grade teacher in New York City. "She said they were going to send me the same prize as the one awarded to the winner."

O'Connell's story, which first appeared in Tuesday's Chronicle, set off a firestorm of controversy, most of it directed at corporate sports giant and race sponsor, Nike.

O'Connell said the Nike representative also said that the sports shoe corporation had also decided to eliminate the "elite" category in the annual San Francisco event and would let everyone start at the same time.

Not good enough, Nike. For your incredibly inept and stupid handling of this whole affair, you earn a Doofus award - in spades!

Our second Doofus award goes to a Canadian mother and her son - classic examples of the breed.

A Canadian woman whose 9-year-old son tunneled into an electric sub-station and was badly burned is suing a Manitoba power utility for negligence.

The unidentified boy was one of four children who couldn't get through a locked gate or over a high fence surrounding the transformer on May 29, 2006, so they dug a tunnel beneath the fence, the Winnipeg Sun reported.

The boy touched a live wire and was thrown 15 feet into the air and landed with extensive burns to his upper body.

The incident happened in South Indian Lake, about 400 miles northwest of Winnipeg.

The mother's lawsuit alleges Manitoba Hydro was "aware of the inherent dangers connected with the power transformer ... and in particular, the danger of allowing the site, which was alluring to children, to be accessed by them," the report said.

The suit contends the boy was left with severe scarring and mental impairment.

Hmm. Let's see, now. The utility company put a fence around their sub-station, and a locked gate. Both worked as they were intended, and the kids couldn't get through them - which, as far as I'm concerned, absolves Manitoba Hydro of any further responsibility. The fact that the kids were so badly supervised, and so dumb, as to dig a tunnel to get in, ignoring warning signs and bypassing the security - well, that's entirely their own fault (and their parents', of course).

If I were Manitoba Hydro, I'd file a counter-suit alleging twofold criminal negligence on the part of the mother: first, by not teaching her son basic common sense, and second, by not supervising him strictly enough to stop him being a dumbass! Doofi, the pair of 'em!

And we wonder why insurance companies have to charge such exorbitant liability insurance premiums . . .

I'd say that the mental impairment was pre-existing and maternally hereditary if you asked me....

Maybe Manitoba Hydro could charge the kid (and his lovely mother, since he's a minor and she's responsible for him!) with criminal trespass and/or vandalism. Oh yeah, and a civil suit to cover the company's cost to repair the damage the little idiot did with his tunnel. And don't forget to recover their legal costs for the suits against her, too!

Manitoba Hydro should shut down the substation and all others configured that way. For the safety of the children. Yeah, that's the answer.

Anon one beat me to it! Charge THEM as recommended and see what happens :-)

Momma musta been smokin a little too much to be bothered to watch the kid...